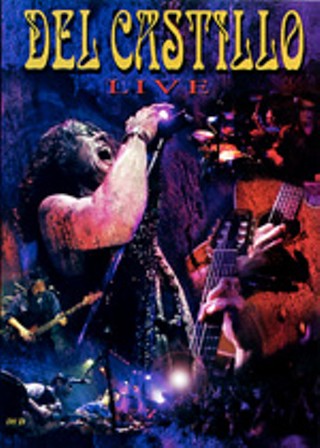 (Smilin' Castle) Perhaps you never swam through a sweaty sea of bodies in the short-but-good old days of Del Castillo playing Steamboat on Riverside Drive. On the strength of those shows, Del Castillo became Austin's Band of the Year in 2003. At the same time, Austin filmmaker Robert Rodriguez, infatuated with their nuevo flamenco rock sound, asked the local sextet to provide music for his film Once Upon a Time in Mexico. As a gift, he also filmed one of their shows, edited it, and gave it to the band. The result is the Del Castillo Live DVD. The group's dervishlike singer, Alejandro Ruiz, typically draws most of the attention, but Rodriguez puts him in the periphery, focusing instead on virtuoso guitar brethren Rick and Mark Del Castillo. Seeing the hermanos lost in the ecstasy of performance is worth the price of the DVD alone. Five songs from Del Castillo's first two albums are featured, including "Días de Los Angeles" from Once Upon a Time in Mexico, plus last year's Austin Music Awards Single of the Year, "Vida." Welcome respites from the frenetic performance footage are one-on-one interviews with the band members. These "how I got started" segments, shot by Danny Dale, are interesting, but stop short just as they get started. Which is perhaps the intent of Del Castillo Live: Whip the audience up and leave 'em panting for more.