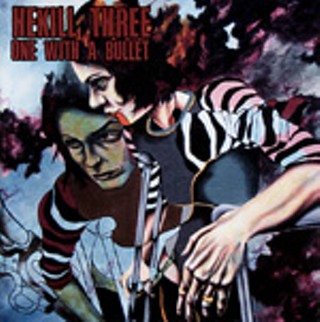 One With a Bullet (Cardinal Zen) Metal is forged in the battering erosion of full-force roar, wave after wave, wherein the seconds of silence between songs are oceans of respite against the fierce sandstorms of assault. On their full-length debut, One With a Bullet, Austin's flagship metal act follows up last year's hand grenade 3.0 EP with a full-on car bomb. Joey Marez's demon seed CD art is matched by the local quartet's musical lockdown (credits, boys – use that gatefold for some names). Dan Collins' storming riffs elasticize Mel Langenberg and Chris Martin's rhythmic press, as Zak McMakin's vigilante vox bellow expertly between extreme and nü. The title track's opening laceration lashes back on the gathering force of "Green Lit," while "Pedigree" stamps its message with McMakin's gritty enunciation and landslide guitars. The solider determination of "Technicolor Endings" effectively matches marching pace with refrain ("There will be no happy ending, there will be no happy ending ..."). "Method One," which follows, gets positively atmospheric by contrast, setting up both the vocal expulsion and musical slalom. This song portends HeKill Three's compositional promise. Only "Standing By" sounds premature, closer "Beverly" ("you're a slut, but I love you") a somewhat standard riposte. Nevertheless, One With a Bullet is 35 minutes of bleeding fingers, bared teeth, and blind rage. Bull's-eye.