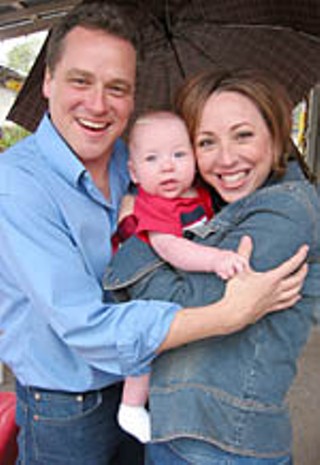 Brandi Warden knew a hit when she heard one.

"Desperately" was a song her husband Monte Warden and his writing partner/best friend Bruce Robison composed in the Nineties. The Tennessee-born former schoolteacher comes by her instincts naturally as the third generation in a songwriting dynasty. Her résumé includes stints in Nashville at Decca Records' A&R department and later in Austin as manager of Arlyn and Pedernales studios. Once married, she started Moonkiss publishing for her husband's songs.

Monte Warden is a native Austinite with a textbook music career, playing professionally since his early teens. In 1983 at the age of 15, he won his first career notices as the Austin Music Awards' Best New Band for Whoa, Trigger! Later that decade, he formed one of the prototypes of modern "alt.country" in Austin's Wagoneers, then embarked on a successful songwriting career that included "Just to Hear Your Voice." With 245 work titles listed on the BMI Web site, his songs have been recorded by the likes of Toni Price and Patty Loveless, and he sports a gold record for "I Wish I Was Wrong" on Travis Tritt's Down the Road I Go.

One evening last October, when the Wardens joined Robison for dinner to celebrate his wife Kelly Willis' birthday, Brandi Warden decided to bring up the subject of the song.

"I have a silly question," she recalls venturing. "How many times has 'Desperately' been pitched to George Strait?"

"I have a sillier answer," replied the lanky, affable Robison. "None."

Robison, who's penned songs for the Dixie Chicks ("Traveling Soldier"), Lee Ann Womack ("Lonely Too"), and Tim McGraw ("Angry All the Time"), hails from Bandera, just outside San Antone. He's released critically acclaimed albums of his own and co-written with the likes of Allison Moorer and Dixie Chick Martie Seidel. That's no surprise as Bruce's brother Charlie is married to Seidel's Chick sister Emily. It's a cozy extended family.

By coincidence, Mike Owens, A&R man for Universal South, had Robison's version of "Desperately." Owens' wife had played the song repeatedly and urged him to consider it for George Strait's new album Honkytonkville. Owens did just that.

The Monday after Willis' birthday, Brandi Warden sent the song to producer Tony Brown in Nashville. By Thursday, "Desperately" had a hold placed on it, and on Friday, it was played for George Strait. The tracks for Honkytonkville had already been chosen, but Strait gave the nod to "Desperately."

The last song picked was the first recorded the following week. On their November 2003 anniversary, the Wardens toasted not just marital bliss but George Strait. Jan. 17, 2004, "Desperately" entered the country music charts at No. 56.

During his SXSW interview two weeks ago, one-time Rolling Stones manager-producer Andrew Loog Oldham reiterated the golden rules of songwriting: "Use words, thoughts, and phrases from everyday language. 'Baby, I love you.' Brilliant."

It's a lesson Monte Warden knows well. For country audiences, hits are usually simple and formulaic, with a wide margin for ballads, religious songs, and novelty tunes. At a songwriting session in the winter of 1997, Warden expressed to his friend Robison a longing for the comforts of life before his then recent divorce, a desire he felt, well, desperately. Robison's solution was pragmatic.

"'If you're going to be this miserable, make it rhyme,'" recounts Warden, chuckling. "In two hours, we were done. It's one of the few songs I've ever written that not one word was changed. No rewrite, no nothing. I love co-writing. I love the challenge of it.

"It was a truly collaborative effort," enthuses Warden, grabbing an aged Martin guitar and strumming. "I started doing this, kind of like 'Cathy's Clown.' Then, Bruce started like this."

"He wanted a song like Don Williams would cut," Warden explains.

"He brings the Buddy Holly, and I bring the Don Williams," pinpoints Robison. "We hope there's not a fight between the two of them."

The First Hit Is the Hardest

What will a hit single mean to a songwriter such as Monte Warden, who's had notable success but no chart toppers?

"It means," he states with conviction, "that forever after, I have had 'The Hit.' People at Wal-Mart can hum that song. That's what I've wanted my whole life. It's a nice feeling, young at 36. I've felt old at 34."

Bruce Robison knows what it's like to have "The Hit."

"'Angry All the Time' changed my life and made people look at me in a different way," he states simply. "Nashville is all about success. That's the measure of a song. You can write a song like 'I Sure Do Like Shopping at Sears,' and it could be the dumbest song on the planet, but if it's a Top 10 hit, that's all that matters there. It's the business of music."

For Brandi Warden, a hit song means something different. The song publishing business lies at the opposite side of the industry she was raised in. Still, during her years in Nashville, she witnessed firsthand how songs were presented – what worked and what didn't.

"A number one hit means that as a publisher I'll get more callbacks on Monte's music," she nods. "'Desperately' will be our calling card for a couple of years." 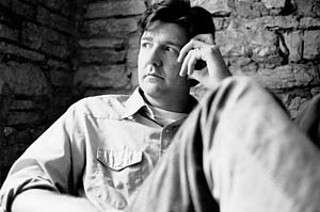 She pauses, biting her lip, hesitant to count on too much before it happens.

"The first hit is the hardest."

And maybe the scariest. Brandi Warden will never forget receiving the news that Strait was recording the song.

"I threw up. I was so overwhelmed it made me sick. My dad had written 'Baby Your Baby' for George on Pure Country, and here we were going to be a single."

Country doesn't get much purer or mainstream than George Strait, something that Bruce Robison hopes will bust a few myths about his own songwriting.

"My business is to get people to cut my songs, and every success in that realm helps. I was maintaining a good reputation as a songwriter in Nashville, but put in a place outside the commercial realm. Part of my struggle has been to change the perception that my songs are good but don't sell lots of records.

"It always rankled me having the 'alternative' tag put on me. I see my music as straightforward with no reason to put it in a subgenre."

Same as all labels, MCA likes its artists to be hit-makers, yet even in the annals of popular music, George Strait is huge.

Little more than 25 years ago, he was playing San Marcos' Cheatham Street Warehouse weekly with Ace in the Hole Band. Fifty-seven million records later, he is, in every sense of the word, a superstar. George Strait has 25 platinum albums, four American Music Awards, 11 Academy of Country Music Awards, and 15 Country Music Association Awards.

"She'll Leave You With a Smile" was Strait's 50th No. 1 single on both the country and R&R charts. In reaching that milestone, Strait surpassed Conway Twitty, who racked up 49 No. 1 solo singles. Strait had his 50th at the age of 50, and if "Desperately" goes No. 1, he'll have had his 51st at age 51. And George Strait wants it as much as his label.

That's good news for the songwriters, says composer and Asleep at the Wheel bandleader Ray Benson, who, like Warden and Robison, plays the Nashville game living in Austin. He says the key to success is radio.

"Having a mainstream country artist play your song on the radio – that's the operative phrase: played on the radio – means a six-figure income," states Benson.

"Here's one little math lesson. If they sell a million records and the rate per song is somewhere around 8 or 9 cents, that's about $800,000 split two ways, and the publisher gets a share. That's on a million-seller record. But the performance rights – when it gets played on radio – the BMI/ASCAP dollars are in the six figures for both for the life of the song."

Bruce Robison knows all about the power of a mainstream artist. Despite two hits, he's also been on the other side of jubilation.

"People say you have to be up-tempo and positive to get a song on the charts," Robison explains. "Believe me, I've tried and have had no success except with my most depressing stuff, so my success has been the exception rather than the rule. Dixie Chicks' and Tim McGraw's number one hits were among my least commercial songs.

"Garth Brooks recorded one of my songs, and the record went on to sell millions of copies. He recorded the song months before and kicked it off the CD at the last second. For months, I was twisting in the wind."

Robison is entitled to note Brooks' diminishing popularity, especially as Strait's is rock-solid. Honkytonkville is currently No. 25 on the Billboard country album charts, one of three Strait titles there. For a songwriter like Robison, it's a good place to be.

There's no question that what Robison and the Wardens value most is the family time that financial success affords them.

Bruce and Kelly are parents of a toddler and nearly year-old twins, and they guard their family time carefully. He never had much use for the star-making machinery of Nashville anyway and admits he doesn't do the things that put him in the spotlight.

"I've come to terms with that," he says plainly. "I take being a father very seriously. In my opinion, that's keeping in the spotlight.

"The Chicks are one of the biggest acts on the planet, and when they go to work, they work at a pace I can't imagine. I can see the dedication it takes to get to that level. I've never worked that hard at my career in my life. When it comes to visiting radio stations, doing the roadwork, and all the legwork it takes to sell lots of records and get songs on the radio, I'm reluctant to do any of that crap."

Monte Warden is not reluctant to do the PR, but he's likewise a family man. Van and Sam, sons from his first marriage, are well-mannered young men concerned mostly with school. Warden takes the greatest fatherly pride in sharing with them his own best moments.

One of those moments occurred in February, when Monte and his sons stood at the Houston Livestock Show and Rodeo and watched George Strait perform "Desperately" before a cheering crowd of 60,000. Van, who has Down Syndrome, is the household's biggest Strait fan, but it was young Sam who announced to anyone within earshot, "My daddy wrote that song!"

And late last year, Monte and Brandi had their own son, Brooks Warden. Brooks is better known to the family as "Caterpillar," which sounds like nothing so much as the name of a fourth-generation songwriter.

A Wish on a Redbird

"My work is done," declares Brandi, and as publisher, it is. Strait's label will continue to promote the song and urge its rise. Still, the good fortune and excitement of being so close to the ultimate success keeps her grounded, as do baby duties.

"I was at McKinney Falls the other day and saw a flock of redbirds, five of them. You're supposed to make a wish on redbirds. I couldn't think of a single thing to wish for."