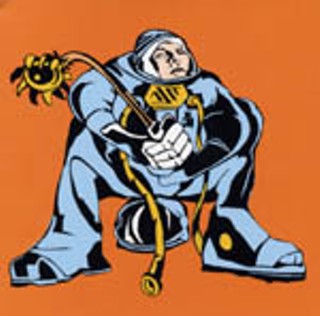 Give (Columbia) With last year's Columbia debut, These Are the Vistas, NYC's the Bad Plus garnered rave reviews while incurring the wrath of the jazz establishment. To old schoolers, the Bad Plus is nothing but a rock band masquerading as a jazz piano trio. To the faithful, they're the saviors of jazz, making the music relevant again. A large portion of the controversy centers on drummer David King, who, if you grew up on sophisticated skinmen like Max Roach or Tony Williams, sounds like a cement-fisted ruffian. If you were weaned on Nirvana, however, you're probably wondering what all the fuss is about. Like its predecessor, Give is edgy, irreverent, and yes, fun. Visionary producer Tchad Blake is back to provide a level playing field for all instruments, lending Give a forceful group dynamic. Pianist Ethan Iverson, while not a virtuoso, is certainly adept enough in both jazz and classical to keep things lively, tussling with King while both orbit bassist Reid Anderson's center-of-gravity. Although most tunes are originals, with the vaguely Latin "Cheney Piñata" and the frolicking "Layin' a Strip for the Higher-Self State Line" as standouts, the band's covers have gotten special notice. This time out, the Pixies' "Velouria," Black Sabbath's "Iron Man," and Ornette Coleman's "Street Woman" get the treatment with the former being a particular highlight. If the Bad Plus provides a portal for novices into the larger jazz world, their tenure in the spotlight will have largely overshadowed any disdain hurled by purists.