With Tower Records closing in June, North Loop's new Sound on Sound hopes to fill some of the void 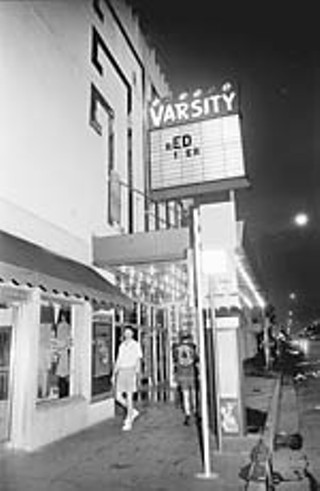 The Varsity on its closing night, 1990 (Photo By Martha Grenon)

Today, Thursday, may be April Fools' Day, but the state of music retail in Austin is no laughing matter. Consider that a decade ago, the Drag was home to six record stores: Sound Exchange, CD Warehouse, Tower Records, Inner Sanctum, Technophilia, and Disc Go Round in Dobie Mall. When Tower goes dark in June, initially reported in this year's first SXSW Chronicle daily that number will be zero. The obvious reason is that today's tech-savvy college students, Tower's chief clientele since the store's 1990 opening in the old Varsity Theater, are as likely to get their music with a mouse click as a credit card swipe.

With the store struggling to show a profit since 2000, roughly the same time frame as the Napster-led MP3 revolution, operations manager Dave Mulholland admits as much, but says there were several other factors in the California-based chain's recent decision to close its Austin store. Even something as mundane as a lack of parking, which Tower finally remedied six months ago by working out a deal with a nearby university-controlled parking garage, took its toll. Something else that might not be immediately obvious, Mulholland notes, is that students are frequently out of town, including during the crucial holiday sales period. "The rest of the year we'd actually do pretty well," he says. 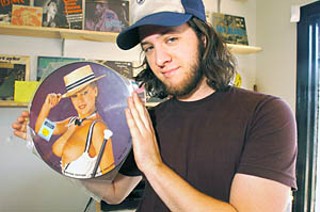 Tower also felt the pinch from big-box retailers like Best Buy and Circuit City, who often sell CDs at or below cost to lure in shoppers they hope will walk out with a new laptop, washer-dryer, or home-theatre system. The store tried lowering its prices at one point to try to keep up, Mullholland admits, but in doing so "basically killed our profit margin" – which, he adds, wasn't all that large to begin with. More intangibly, Mulholland says many people saw Tower as corporate interlopers in the local music scene, when in fact the store went to great lengths to incorporate as much Austin into its retail strategy as possible.

"There's 20 people here who are huge supporters of the Austin music scene," he says. "They're working here because it's what they love." The closing is especially bitter, Mulholland says, because Tower is coming off its most successful SXSW ever, with Dubliners the Thrills even recording their in-store set for a possible live album. As bleak as things may be, though, it's unlikely record stores will ever completely vanish.

That's what Jason Costanzo, who opened Sound on Sound at 151 E. North Loop last week, is banking on. Spurred by Sound Exchange's 2003 demise, Costanzo saw an opening for a store catering to underground music and vinyl aficionados. "There's definitely a huge hole for used vinyl," he says. "I don't think any other stores have taken it upon themselves to get good vinyl, and that's what I wanna do." Costanzo acquired his stock by scouring the Internet for bulk deals, buying out collectors, and loading a moving van with the remnants of a small Ohio store's inventory.

Though Sound on Sound offers everything from country to show tunes in its stacks, it's definitely geared toward the punk, hardcore (Costanzo is a member of locals Storm the Tower), and metal side of the aisle. "I'm limited in space, so I can't really go crazy in every genre, but I'll definitely be pretty loyal to the underground music scene," he says. In turn, Costanzo figures people's loyalty to hard-to-find music (and grassroots retail) will be enough to keep him afloat. "I'm the only one working here, so my expenses are pretty low," he chuckles.

Firing Up the Grill

"I'm back again to stay." So says Eva Lindsey, who recently retook the reins of landmark Eastside venue the Victory Grill. Lindsey managed the grill during its mid-Nineties rebirth until 2000, when she took a teaching job at Austin Business School for the health insurance. Lindsey, who grew up down the street, decided it was her mission to restore the 59-year-old nightspot – founded by her father's friend Johnny Holmes in 1945 as a place for African-American soldiers to celebrate the end of World War II – to its "fabulous" glory. "The magic of the Victory Grill is you can't kill it," Lindsey says. "Even in bad times, it's continued to survive." She recently attended the 18th annual Curtis Tunnel Cultural Heritage Award presentation, where the grill was designated an official Texas Treasure. (It's already in the National Registry of Historic Places.) Lindsey calls the grill "living history," and it is, having hosted and/or fed everyone from Billie Holiday and Janis Joplin to Big Joe Williams and B.B. King, whom Holmes used to promote. She figures it will take about $300,000 to restore the East 11th Street venue, and hopes to finish putting on a new roof in the next month. From there, she says, the grill will open for benefits while the restoration is done in phases, and for good in early 2005. "I invite everybody to be a part of it," says the donation-seeking Lindsey. "I'm here every day from 10am to about 4pm." 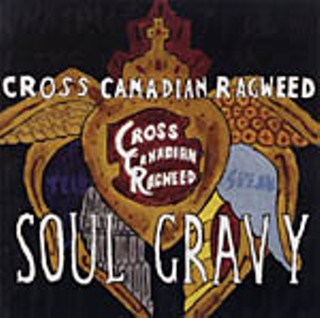 The Oklahoma quartet, which welcomed Willie Nelson for a fiery "Whiskey River" at last year's picnic, has long been one of the best-kept secrets of the "Texas Music" circuit. Or at least they were: Soul Gravy debuted at No. 5 on the Billboard country chart last week.

CAT SCRATCH FEVER: Soul Gravy closes with a hidden cover of Ted Nugent's "Stranglehold," the song Matthew McConaughey told Texas Monthly he kept in his head while bringing Wooderson to life in Dazed and Confused. All right, all right, all right.

Schneider and Patrice Pike Sunday on the South First Street bridge over Town Lake. Tickets are $60 or $100 for reserved tables. 6:30pm. 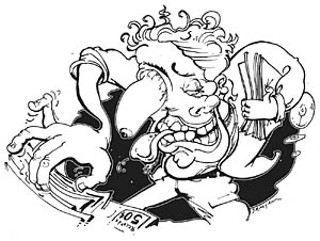 With the Austin Record Convention inhabiting the Crockett Events Center, 6301 Hwy. 290 E., Saturday and Sunday, 10am-6pm, $4 admission good for both days, here's the Top 10 things you're likely to overhear.

7) "This Moby Grape LP is in mint condition. Those scratches are just cosmetic."

5) "How many times has Daddy told you: Those Sippie Wallace 78s are not coasters!"

3) "I don't care if it was just reissued – the last thing I need right now is another copy of Rumours."

As part of its ongoing "Artists Among Us: Poster Art in Austin" exhibit, the Austin History Center is hosting a reception Friday evening, emceed by the one and only Eddie Wilson. Former Armadillo poster artist Bill Narum and Austin expat Nels Jacobson (Club Foot) will speak, with music by Juan Gutierrez and Moonlight Towers. Free.

Austin Music Awards show pillagers Tia Carrera fire up their psychedelic sludge engine every Wednesday in April from 8pm-midnight at Jackalope on Sixth Street. Nearby shot bars advised to watch out for a broken glass or two.