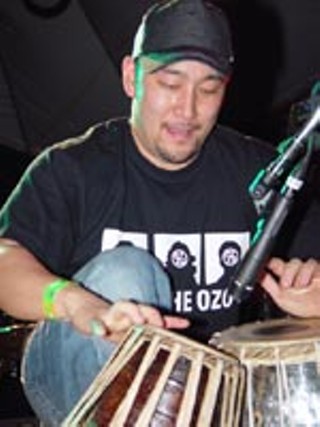 Jiro Yamaguchi, one of the Ozo 3

All the Young Dudes

Well, boys and girls, SXSW 04 had it all: police altercations, hookers, legends, movie stars, and Little Richard preaching the good gospel. The Georgia-born piano-pounder supplied the thrills and chills at both his Thursday-morning keynote speech and Austin Music Hall showcase that night, where the party favors were "Little Richard Bibles" complete with an autographed photo of the notorious introvert and Denny's connoisseur. 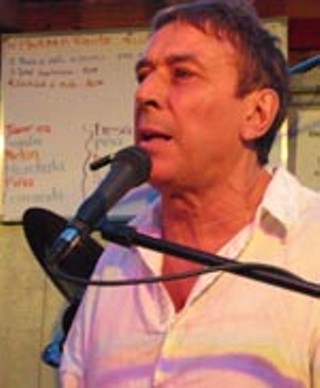 Ozomatli, the only act more talked-about than Mr. "Long Tall Sally," made their avalanche of publicity ("It certainly wasn't free," deadpanned SXSW director Roland Swenson) pay off at their boisterous, semisurprise Stubb's appearance Saturday night. Bassist Willy Abers dispelled the rumors of Ozo boycotting Austin forever after as "bullshit" (their La Zona Rosa appearance on April 22 is already on sale), and marveled at the outpouring of support given the embattled L.A. Latino rap-rockers since their Thursday-morning run-in with some overzealous APD officers. As of Tuesday, the charges against Abers, drummer Jiro Yamaguchi, and manager Amy Sue Blackman-Romero still stood, but the number of "Free the Ozo 3" shirts spotted in the crowd should cover any legal bills two or three times over. See Not Quite 'Ya Se Fue!'for more fallout.

After her release from jail, Blackman-Romero ran into News 8 Austin man on the scene Andy Langer, whom she recognized instantly because her cell's TV was tuned to News 8 all night. "All the prostitutes love you," she confided. Other lewd SXSW news included money-grubbing Austin punks the Yuppie Pricks using local burlesque dancer Susan Wayward as a sushi serving tray at their Wednesday-night showcase, and metal crunchers HeKill Three's Friday afternoon bacchanal at Sugar's, where it was reported frontman Zak McMakin does a mean lap dance. 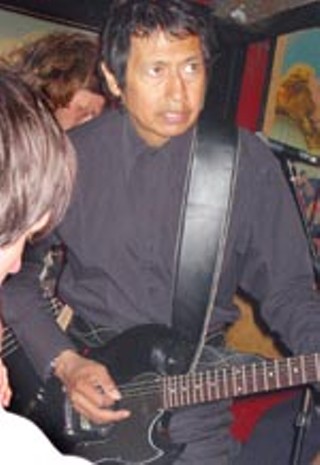 Alejandro Escovedo back in action at the Continental Club

On a significantly more serious note, SXSW 04 was also a de facto celebration of ailing Austin icon Alejandro Escovedo. The annual Saturday-afternoon gathering at Las Manitas, normally an Escovedo-steered song swap, became a preview of the forthcoming tribute album in his honor, Por Vida. John Cale, Bob Neuwirth, Jon Langford, Sally Timms, Los Lonely Boys, Stephen Bruton, and Kris Kristofferson serenaded the once and future True Believer as onlookers and performers alike tried to contain their emotions. "I haven't seen that many grown men with tears in their eyes since Doug Sahm's funeral," said the Chronicle's Margaret Moser. The next night, Escovedo took the Continental Club stage and delivered a killing 90-minute set loaded with new material and a powerhouse cover of Mott the Hoople's "All the Young Dudes."

A human Ozomatli T-shirt, Kristofferson was seemingly everywhere, showing up at KGSR's Four Seasons breakfast broadcast Friday to catch up with Willie Nelson and Toots Hibbert. That night at the Continental Club, he was joined by head Jackass Johnny Knoxville, Sopranos star Drea de Matteo, Billy Joe Shaver, J.T. Van Zandt, and the Weary Boys for a set by Waylon Jennings' widow Jessi Colter (with Don Was on bass) and son Shooter. Even Rolan Bolan, the spawn of T. Rex fire-breather Marc, was on hand passing out CDs. Somehow Kristofferson managed to return Saturday, where he played an impromptu set and chatted with an awestruck Scott H. Biram – after first sitting in with Bruton at the Saxon Pub. 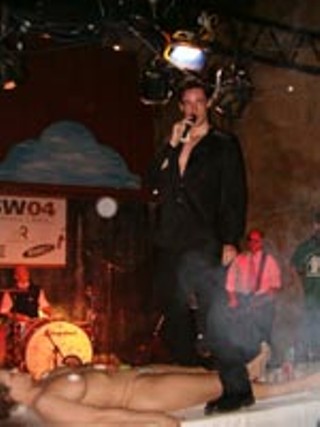 The Yuppie Pricks' Trevor Middleton helps himself to some "sushi."

More, so much more: They Might Be Giants and DJ Shadow played surprise gigs at the Parish Friday and Saturday... Pete Rock spun for fun at the Copa... Wayne Coyne and wife were seen outside Emo's Friday night, waiting in line for the Rock Against Bush showcase. Chronicle writer Greg Beets made it in, and said several people heckled Jello Biafra during his between-band remarks... Squeeze player Glenn Tilbrook sat in with humorous Austin honky-tonker Cornell Hurd, whose "Genitalia of a Fool" he recently recorded... The Polyphonic Spree debuted multicolored robes Friday night at Stubb's, though it was Broken Social Scene that left everyone buzzing... Dres of early-Nineties rappers Black Sheep got up with Handsome Boy Modeling School at the Music Hall Saturday... During Patty Griffin's Saturday showcase, Esquire editor David Granger and Texas Monthly honcho Evan Smith cornered a pregnant Natalie Maines, who with bandmate Emily Robison, also caught singer-songwriter Sandra McCracken Wednesday at the highest and longest-named SXSW venue, the 18th Floor at Crowne Plaza.

Surveying the aftermath Monday afternoon, Swenson said attendance was up enough to bring the festival back to pre-9/11 levels. Friday and Saturday's free Auditorium Shores shows also did gangbusters, while most big-ticket showcases – Joan Jett, the B-52's, Mission of Burma, Big Star, N.E.R.D. – were well-attended but line free (notable exceptions being Modest Mouse, Los Lobos, the Church, and Franz Ferdinand). Some grumbling surfaced over subpar sound, mostly at spaces that don't routinely offer live music, but Swenson chalked it up to the realities of staging a festival jam-packed with 1,261 official performers. "We have to find space to hold everybody, and that takes about 50 venues," he reckoned.

Not that everybody needs a stage. In the wee hours of Friday, Columbia Records A&R head Tim Devine, clad in sunglasses and a bathrobe, planted himself in the Four Seasons lobby and read aloud from Walter Yetnikoff's brand-new bio, Howling at the Moon. Don't worry, Tim: What happens in Austin stays in Austin. More or less.

Yes, Virginia, there is life after SXSW:

Let's Roll: Both Austin Roller Derby leagues hit the track Sunday at 6pm. The Texas Rollergirls invade Playland with the Pretty Please and Real Heroes; their Lonestar Rollergirls rivals do the Thunderdome with the Lifters and Honky.