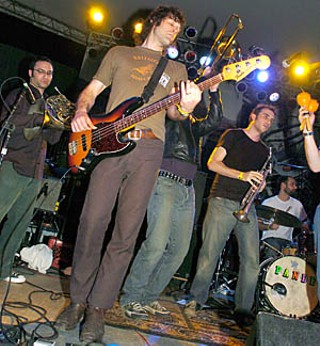 Stubb's, Friday, March 19 "Enjoy your lives," a jubilant Kevin Drew exhorted at the end of Broken Social Scene's energizing set at Stubb's. "You're supposed to enjoy your lives!" Enjoying life is all but impossible when you're watching 14 people strumming, thumping, blowing, leaping, clapping, singing, and generally having more fun than the law allows. There was loads of reciprocation from the head-bobbing, fist-pumping crowd, responding to the synergy of the Canadian musical collective and the grandiose pop confections of their remarkable You Forgot It in People. Broken Social Scene's approach is novel for an outfit with so many members. Every note, every hand clap, every shake of the maraca is positioned to prop up the driving anthems belted out primarily by Drew with his high, passionate pitch. Sometimes the folks onstage had nothing better to do than jump up and down and clap. When they all do it at the same time, as on the ebullient, bass-line-driven "Stars and Sons," the effect is staggering, spreading through the crowd like wildfire. Opener "Lover's Spit" found Drew's tender croon filling the air before building into a brassy crescendo. "KC Accidental" was the opposite – a hyper, full-participation stew that made good use of the band members' art-rock backgrounds, as did the rousing, Daydream Nation-esque "Cause = Time." "Almost Crimes" brought Metric's Emily Haines and Stars' Amy Millan into the mix, nailing the whole Strokes/NYC party vibe, but with a far bigger, more interesting sound, and vibrant vocal trade-offs galore. As if the band needed more ammo, Haines' vocally tweaked "Anthems for a 17-Year Old Girl" made "Park that car/Drop that phone/Sleep on the floor/Dream about me" a popular slogan about the Stubb's. As remarkable as Broken Social Scene's music is, the enthusiastic and colorful way in which they brought it to life was truly stirring on every level, so much more than anybody could have asked for.