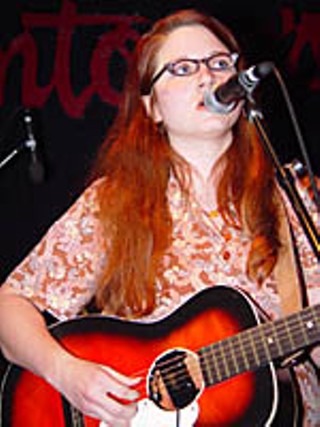 Antone's, Friday, March 19San Francisco's Jolie Holland shouldn't be playing SXSW. In fact, Holland shouldn't be playing any festival or show nationwide right now. The reason for this is not lack of talent or embarrassment onstage. It's solely because Jolie Holland shouldn't be playing anytime in this decade – or the last eight for that matter. With songs lifted straight off Ozark Mountain front porches in the Twenties, Holland wailed and haunted an Antone's audience. Dressed like her songs sound, in a simple dress and tie-up shoes, she wasted no time in laying on the blues. A founding member of Vancouver's Be Good Tanyas, Holland has taken a step back in time from the bluegrass-pop oddities that group perfected. Her voice is a muted trumpet erupting from an old phonograph. "I would have Austin as my footstool and the world as my throne," the native Texan sang on "Poor Girl" off her soon-to-be-released Anti- debut, Escondida. Her voice transgressing octaves almost as if she were yodeling, Holland swept through waltzes and ballads with the speed of an Arkansas stream: smooth, swift, and without halting. With eyes closed and mouth wide, she told stories of lost love and found paths. "Old Fashion Morphine" was a tune the likes of which have only been heard from greats like Holiday and Fitzgerald. Holland is indeed a black soul sister trapped in the body of a white girl from Houston. The subtle drum brushing of Dave Mihaly and the summertime slide guitar of Brian Miller accentuated Holland's vocals and violins perfectly. But when original Be Good Tanyas Samantha Parton and Trish Klein joined the threepiece on mandolin and banjo, respectively, for two songs, another more exciting take on Depression-era jazz was born. Holland's stage show might not be much, but her voice alone summons ghosts from time long gone.