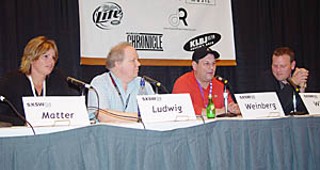 Austin Convention Center, Friday, March 19 Imagine musicians as carpenters, measuring, cutting, and assembling the wood, and mixing engineers as designers that envision the end product, this drawer here, that knob there. Mastering engineers, then, are the artisans who apply the finishing touches, some light sanding here, polishing there, etc. Technically speaking, mastering engineers prepare studio output for commercial production, and SXSW couldn't have picked a better group to talk about this little-known world. Masterdisk's Howie Weinberg (U2, Nirvana, Tom Waits) moderated Austin's Jim Wilson (Richard Thompson, Flatlanders, Bob Mould), mastering mandarin Bob Ludwig (too many platinum albums to mention), and Moonlight Mastering's Nancy Matter (Ray Charles, Slash, Billy Preston), filling in for Sterling Sound's Greg Calbi, who couldn't attend due to weather-induced flight cancellations. In the new world of accessible recording technology, the goal of mastering is even more important to, as Ludwig explained, "getting the recording as perfect as possible." Weinberg talked about fine-sounding Pro Tools projects, while other digital recordings have "a little too much resolution." Matter recommended that musicians contact mastering houses for input while recording, "if nothing else, to save money." Topics such as vertical modulation, dithering, and harsh high transients assumed a basic understanding of the recording process, but those in attendance were treated to valuable insights from some of the industry's best ears.