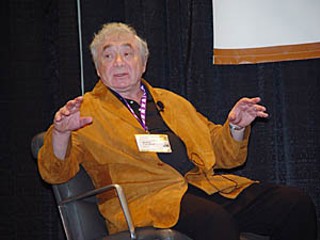 Austin Convention Center, Friday, March 19 As head of CBS Records from 1975 to 1990, Walter Yetnikoff amassed an amazingly lucrative talent roster led by Michael Jackson, Bruce Springsteen, and Billy Joel. He also did lots of drugs, chased lots of skirts, and made lots of enemies with his classically cantankerous demeanor. As a law firm refugee brought to Columbia Records by Clive Davis in 1962, Yetnikoff used his clinical understanding of the artistic mind to bully artists into submission. "I was in awe of the artist's ability to create what I couldn't, but I also had knowledge that the artistic temperament is very fragile," he related. Raised by perfectionist parents in a rough Brooklyn neighborhood, Yetnikoff now says his business aggression was motivated by an underlying desire to beat up his abusive father. This is not the guy an artist would relish taking to war. Paul Simon did just that, and Yetnikoff said he dismissed the diminutive tunesmith by saying, "Look, guys like you used to work for chickens 100 years ago." He was no less subtle in doing battle with rival Warner Bros. Records, rallying CBS shock troops with the Bugs-bashing battle cry, "Fuck the bunny!" However, as a defanged elder industry statesman, Yetnikoff's wry, bean-spilling loquacity was downright charming. Interviewer David Ritz, who co-authored Yetnikoff's new autobiography, Howling at the Moon, drew stories out of his subject in a manner that made you want to buy the book, which may now be made into a movie. "I'm not sure who's going to play me," Yetnikoff quipped, "but I have my heart set on Robert Mitchum, so there's a slight problem."