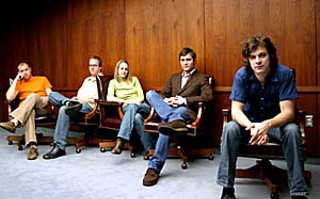 The story of Austin's Zykos is almost biblical in expanse, going back decades to when Bonzo was president, Wham! whispered on the airwaves, and Houston was in its oil-boom heyday.

"Four of the five of us grew up together," nods Mike Booher, the band's singer and lyricist. "I even lived on the same street with [keyboardist] Catherine [Davis] and [bassist] Mike [Roeder]."

After graduating from Klein Oak High School in 1995, the childhood friends all moved to Austin to attend college. It was then things started moving – slowly – toward the formation of Zykos.

It wasn't until late 2000 that the band officially formed; it was another year and change before they played their first show in early 2002. In the two years since their live debut, Zykos' glacial pace has picked up speed. They signed to Ben Dickey's Post-Parlo Records and released their darkly charismatic debut, Comedy Horn, last year.

The album bears the indisputable mark of late-Eighties Brit influences, Booher's gritty tenor channeling the living ghost of Richard Butler; the music moves smoothly through the ears, taking its time to get where it's going, much like the band itself.

"We're frantically writing [a second album]. Hopefully in early summer we'll try to record it and it'll be out maybe in October.

"When people say that, it always means three months after that, especially for a band like us," Booher laughs. "We're pretty slow, but we're getting into the habit of writing more often, maybe for the first time ever. We're still learning to play together. We tend to overanalyze, talk about what we're writing a lot; we're learning how to just make it be.

"But we bought a van," grins Booher. "So I guess we're sort of serious."