Neither Jared Connor nor Rob Jones is playing a SXSW showcase, but their Austin-based talents for gig posters have just as much to do with rock & roll as any dozen bands.

"A lot of it's from Crap Hound, a clip-art magazine that only put out five issues, but all of 'em were badass," he enthuses. "Then I take it and just fuck it all up."

Meanwhile, if you've been to a White Stripes show in the last year, chances are you've seen Rob Jones' work (www.animalrummy.com). His 26 posters for the indie-squall darlings are a tour de force of black on red on white evocations of Jack and Meg's spare, bluesy panache. They may be the single best artistic representation of a band's visual identity since Glenn Danzig appropriated the Crimson Ghost for his fledgling Lodi outfit the Misfits.

With nearly 100 poster artists from around the country loading their wares into the Convention Center's ground floor exhibition hall, there's likely a lot more "I Told You So's" in store for this, the last day of Flatstock 4. As in 20 years from now when these posters are more collectable than that Turbonegro and White Stripes vinyl you were hoarding. 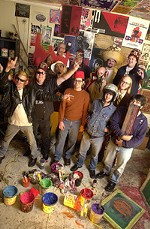 The Smell of Success
The resurrection of Austin's poster scene