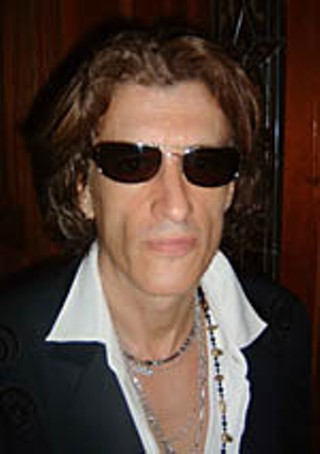 Why He's Here: The Aerosmith guitarist is in town to support his band's new album of blues, Honkin' on Bobo. Perry is here for the other side of the business, too: He heads up his own Columbia imprint, Roman Records.

On Texas Blues: Johnny Winter is probably my biggest influence as a contemporary slide guitar player. We're talking technical hit-me-over-the-head ability. He's so unique, because there's such a mismatch of so many different talents. He sounds like an old soul. It was always, "Where's that coming from?" His playing is just so amazing. And his slide playing, stuff like Son House and Fred McDowell, he just took it electric. He did to slide playing what Jeff Beck did to that other kind of blues playing.

And then there's Stevie Ray Vaughan. Stevie was one of the few that really captured it for me. A lot of people can imitate the blues, but very few lived it. And it came out in his playing. I'm still stunned that Stevie Ray Vaughan isn't with us. I remember when I heard the news. I was in Barcelona, and it was just devastating. Really devastating.

There's also ZZ Top. I still learn a lot from Billy Gibbons – every lick, old or new. They're one of the few bands that managed to keep the distance between blues and rock very short. They do rock & roll, but you can hear the blues bubbling under. To me, it's modern blues. Billy's amazing.

On the Business: I've been in the business a long, long time and seen so many changes. I think after you see the first two or three trends that could be perceived as leaving you behind, you learn pretty fast that things are always going to change. When disco was king and our kind of rock music stopped being the top of the charts, I said, 'Wait a minute. How is this gonna work? Do we just have to stop playing now?' And then, of course, punk came along as an answer to disco. That's when I learned that if anything is going to stay the same, it's that things will always change.

And as a music fan, I love the energy that change brings. It means that there's new music to love coming out all the time. Thank god I have a hip 17-year-old to keep me current. And that's why I'm here. We've got a day between Laredo and Little Rock to stop here and get a vibe for what's going on. New music is invigorating, and God knows there's a lot of it here.