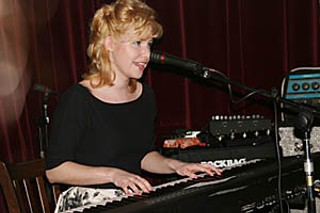 Lounge, Wednesday, March 17 The pop landscape would certainly look a lot different if all young blond singers working today were as witty, articulate, and wry as Nellie McKay. Then again, acts like McKay wouldn't be the breath of fresh air this business so desperately needs if that were the case. McKay played it safe as she started off, opening her filled-to-bursting showcase with whimsical, charming songs off her debut, Get Away From Me. The subject matter of these "safer" songs covered everything from the redemptive powers of adopting a stray dog ("That's what it's all a-bow-wow-wow-wout!"), the death of a beloved cat, and "a story about how I moved out of the hood and into shopping at Target." While the whimsy sometimes bordered on novelty, McKay's confidence lacked the irony of acts like Ween or Tenacious D; this saucy lass was earnest in her worldly but not jaded, sweetly caustic observations about the mundaneness of life. Toss those Norah Jones comparisons in the bin, though, because the only thing these two have in common is the piano. This was most clear when McKay's subject matter took a darker tone, the demure young lady dropping F-bombs faster than Eminem and tossing around references to 9/11 and the war in Iraq. This segment was quite possibly the weakest of McKay's set, but she redeemed herself with her final three numbers, "Clonie" ("I'm the only person I've ever loved"), "David," and tour de force "I Wanna Get Married." This closer showcased McKay's jazz chops as she skewered the torch song, singing, "I want to pack little lunches for my Brady Bunches, then read Danielle Steele." It's refreshing to see a teensy, sweet-looking young lady with brains and a filthy mouth, the perfect specimen of postmodern femininity.