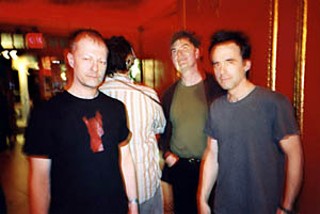 Mission of Burma didn't reunite to compare paunches and hairlines. The reconvening of these early-Eighties Boston post-punks isn't a cashing-in or mending of fences. Attribute it to legend. As with the Velvet Underground, few MoB albums sold, but the people who bought them seem to have all started bands. The post-Mission "influenced-by" list is ridiculous: Sonic Youth, Hüsker Dü, Pavement, Pixies, Nirvana, even Moby and R.E.M.

"I can't hear it," says founding guitarist Roger Miller – unintentionally ironic, as Miller's bouts with the hearing disorder tinnitus forced the band's early split. "People tell me we've influenced them; I had no idea."

In the 20 years since their 1983 farewell, the members have remained vital: drummer Peter Prescott in Volcano Suns, Kustomized, and Peer Group; bassist Clint Conley produced Yo La Tengo's 1986 first LP and is currently in Consonant; and Miller in avant-garde experiments Birdsongs of the Mesozoic (along with original Burma tape manipulator Martin Swope) and Knitting Factory-friendly ensembles Alloy Orchestra and Binary System. But Burma, says Miller, "defined my career."

The band was convinced to get together in April 2002 for the All Tomorrow's Parties festival in Rye, UK (like SXSW, but with chalets).

"We were pretty rusty at first, but as soon as we anchored into the groove, I started writing again. Since Burma, I've done stuff more overtly avant-garde, but it feels totally natural. I can make things as complex or simple as I want."

In no way is the new Mission of Burma a step back to 1983. Back then, MoB was so far beyond 2004 that the effects of their stellar new ONoffON on Matador may take 20 years to truly sink in.

"We know these songs really well now," Miller says. "So it's time to start working on new ones. Whether they ever get recorded or not, I don't care. I have to be working on new songs. Just like a tortoise. You know, when a tortoise stops growing, it dies."

Mission of Burma, That's When I Reach for My Revolver, Sonic Youth, post-punk, Boston, All Tomorrow's Parties, Roger Miller, Clint Conley, Peter Prescott, Birdsongs of the Mesozoic, Martin Swope, OnoffON, Matador, Our Band Could Be Your Life