You Know the Rules (Mint) 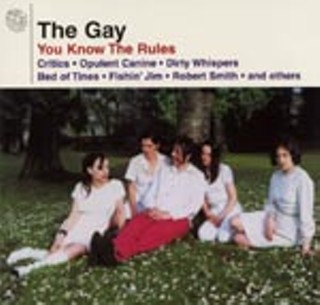 You Know the Rules (Mint) Like the nerdy freshman shadowed by her valedictorian / homecoming queen sister, the Gay suffers inevitable comparisons to labelmates the New Pornographers. While big sis may get all the scholarship offers, this combo deserves their own "most likely to." Both are Vancouver "supergroups," have female singers, and share a label; plus, New Pornographer's Kurt Dahle produced this disc. The similarities end there. While New Pornos focus on the honor society of bombastic pop like XTC, Buzzcocks, Cheap Trick, etc., the Gay prefers obscure extracurricular quirkiness like chess club presidents the Feelies, Look Blue Go Purple, Martha & the Muffins, the Left Banke, and the Ladybug Transistor. From the first guitar loop and Debbie Harry-ish vocals of "Opulent Canine" – a queer ditty about the feline forays of one paramour pup – the Gay establishes its underdog status. Featuring different songwriters/lead singers (high school yearbooks offer better credits!), You Know the Rules careens from surfy, strummy Shop Assistants-y lilts ("Vacation," "Robert Smith") to elaborate movements worthy of Jack Bruce, Declan MacManus, or (eek!) the Polyphonic Spree ("Bed of Tines," "Dirty Whispers"). There's even a poignant sing-along ("Palace") and an impish tune that sounds uncannily like Imperial Teen ("Fishin' Jim"). Like a next-in-line sib, the Gay possesses an almost weightless wistfulness, expressing the yearnings of one to whom things do not come easily. (Thursday, March 18, 1am @ Lava Lounge Patio)