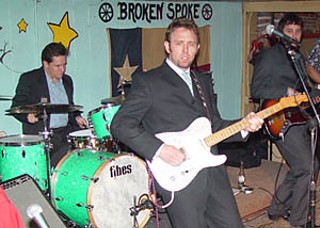 Taking the bar exam: the Derailers (Photo By Gary Miller)

In their "natural habitat" of the Broken Spoke, the Derailers took the stage Friday for only their second show since founding singer-guitarist Tony Villanueva's New Year's Eve departure. With six-stringer Casper Rawls sitting in, they hardly missed a beat as it took the twangsome quintet all of 10 minutes to fill the dance floor at the South Lamar landmark, which turns 40 in November. Earlier, guitarist/vocalist Brian Hofeldt revealed the group's in no hurry to replace Villanueva: "Tony and I were singing together for 15 years, and in the Derailers for 11," he said. "It's kind of like a divorce." Albeit an amicable one: "He's still my buddy," Hofeldt added. Bassist Ed Adkins alternated lead vocals with Hofeldt on boot-scooters like "Waltz Across Texas," "Pick Me Up on Your Way Down," and "Act Naturally," while soundman Bradley Jaye Williams hopped onstage for some saucy Tex-Mex. Hofeldt, after admiring owner James White's vintage 1948 jukebox, said the group has been preparing for their next album, but has no plans to hit the studio anytime soon.