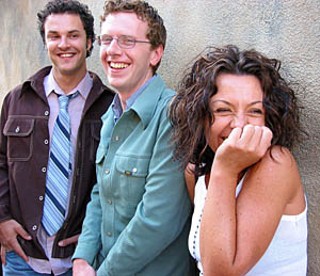 A green card is a Permanent Resident Card, evidence issued by the U.S. Citizenship and Immigration Services that allows someone foreign-born lawful permanent resident status with a right to live and work permanently in the United States. In other words, the Greencards is an apt name for this local acoustic trio composed of an Englishman – fiddle player Eamon McLoughlin – and two transplanted Australians, mandolin player Kym Warner and bassist Carol Young.

If McLoughlin's name sounds vaguely familiar, it's probably due to his past work with Ray Wylie Hubbard, Bruce Robison, Alejandro Escovedo, and the Austin Lounge Lizards. For his part, Warner won four Aussie National Bluegrass Mandolin Championships before moving to Texas, while Young had two No. 1 singles there in 2000 and was twice nominated for Country Music Awards of Australia.

When gigging around town, the trio is usually joined by an equally talented acoustic guitarist: Robbie Gjersoe, who plays with the Flatlanders, or Rich Brotherton, Robert Earl Keen's guitar man. It's evidence of the group's talent that they attract such accomplished players.

"Those guys love to play our type of music and don't get to do it very often," reasons Warner. "We just asked them if they wanted to play and they said yes."

The band has just returned from Tamworth, an annual weeklong festival sponsored by the Country Music Association of Australia.

"It was the first time we played there with our own band," Warner relates, "and the reception was fantastic. Eamon loved it and we got to see some of our relatives for the first time in quite a while."

The trip was a success until Warner tried to re-enter the U.S. in Los Angeles, and it was determined that his passport was missing a necessary stamp. Back he went, a trip that took up most of a week.

"We're playing a lot more festivals this year, in California and at Merlefest in North Carolina and in Vermont," says Warner. "Plus we're touring with Bruce Robison and Kelly Willis, and that'll get us up into the East Coast, which is the next step we wanted to take.

"We love Austin, and we've got plenty of shows around here, but it'll be nice to branch out a bit."