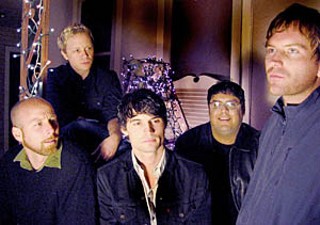 "It's just as much about Rush as it is about Duran Duran," explains Eddie Robert. "Rock music now is constantly being distilled into something else, but it's just rock."

What Robert is really saying is that Austin's I Love You but I've Chosen Darkness isn't post-punk or New Wave. They're a rock band, they play rock songs, and it's fun. Screw the labels.

ILYBICD bassist Robert, singer/guitarist Chris Goyer, and keyboardist/guitarist Ernest Salaz know about rock & roll. All have graduated from local music institutions – Paul Newman, Windsor for the Derby, and Glorium, respectively – and all have paid their dues in the scene. Now, with the help of drummer Tim White and new guitarist Daniel Del Favero, they're putting that experience to work.

"I feel like I really want to do it right this time," stresses Salaz. "Learning from all our past experiences, I just want to have everything on the level, and try and be successful with it. Nurturing it like it's something that will give something back eventually."

As the rockers nurture, ILYBICD is already starting to return the favor. The quintet hit home last fall with an infectious self-titled EP released on local imprint Emperor Jones and produced by Britt Daniel, they've bred a live performance that delights dancing hipsters, and the boys aren't planning on slowing down.

"We want to continue to enjoy ourselves and not stress out about having fun," Robert hopes. "As long as it's satisfying and fun, then that's cool."

Founded in 2001 by Goyer and now Pack of Lies guitarist Jason McNeely, who played together in Windsor but wanted something a little more cohesive at home, the band is concentrating on writing now.

"The focus is a good vocal melody and hopefully lyrics that aren't terrible," Goyer says. "I think we try and write songs that satisfy us."

That insouciant attitude is attracting fans tired of emo that are looking for something fun and fresh in music. The songs may have a retro feel to them, but they're all new.

"Things are going really well for us as far as writing and our friendship as a band, so we're happy," Goyer shrugs.

They're only getting better.