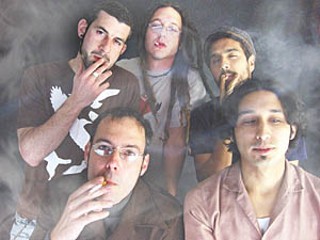 Summoned into being by the 1997 release of Lee "Scratch" Perry's Arkology box set, Austin's Echo Base Soundsystem began with the basics: dub standards by Lee Perry, King Tubby, and Augustus Pablo.

"Once we caught our stride on the classics," explains Phillip Hernandez, EBS's Melodica player, "we began to use dub as a springboard into other musical waters."

"At times our electronic accents are so engrained within our sound that when we're playing live, I can hardly tell where they are coming from," chuckles Pete Neonakis, the band's Rhodes piano player.

Whether it's Neonakis switching over to his Korg MS2000 synthesizer, Hernandez on his MicroKorg, drummer Andrew Gerfers toying with his SP-303 sampler, or Eddie Torres tweaking his guitar, there's never a dull moment as the band locks into a pulsing groove. The group's self-titled debut from last year is a meditation of mystical proportions.

"Communication between band members is nothing short of telepathic," beams Neonakis.

Capturing the depth and soul of dub, songs such as "Nyingje" and "Dem Have" build upon established reggae traditions with a confidence that coughs digitally in the face of inexperience. As comfortable with jazz intonations as they are with flights of drum and bass, the cohesiveness of EBS's explorations presents itself as the album's marquee attribute.

Having worked with producer E. Clarke Wyatt on their first project, Treviño notes that "we actually had to shorten our expansive songs a bit in order to move away from that jammy feel in favor of an epic mysteriousness, reminiscent of Ennio Morricone."

With their performance at SXSW 04 coming on the heels of their 16-date the Force Unseen Tour of the East Coast, Echo Base Soundsystem is impressing music fans who are looking to augment their exposure to the increasingly popular genre of experimental dub.

Along with incidental cohorts such as HiM, Mice Parade, and Sub Oslo, Echo Base is helping put the American strain of dub in contention with its Jamaican and European counterparts.