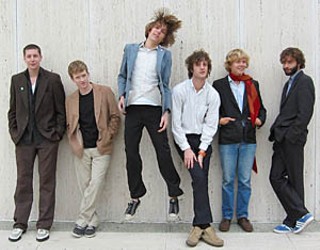 "We are the robots."

With this intonation by Bill Baird back in a Portland bar roughly four years ago, Sound Team was born. Baird and his brother Michael, the founding members of the now sixpiece with increasing local buzz, played three songs to a sparse crowd with just a guitar and a synthesizer. Someone in the crowd hollered, "More, more!" and the improvisation began.

"Bill has a vertical approach to songwriting," says guitarist/singer/pianist/co-writer Matt Oliver. "He works in layers. I have a more horizontal approach."

Together they create a musical parabola that serves one purpose: to get asses moving. A Sound Team show is like a musical enema: Any bad feelings are exorcised courtesy of the denizens of "bonk" – an amalgam of bop and funk – inspiring you to dance to the orange sound of pure roller skate joy.

In addition to being victorious on the local battlefield, these teammates are also DIY champions. The group converted an old record-pressing plant on East Fourth Street into a recording studio, where they recently completed (and sold out of) a limited run of 100 cassettes titled Yes. The cover and sleeve to each tape was individually lettered and printed by guitarist/bassist/vocalist Sam Sanford. It's that kind of devotion and attention to detail that represents their ardent independence as artists.

"We make the exact recordings we want to make in exactly the kind of situation we want to do it without needing a record company to give us a bunch of money up front to make our recordings," says Sanford. "We have a big advantage that way.

"We work better that way," he continues. "We make better product when we're just focusing on making music and not being distracted by thoughts about the future. We feel that the future is secure even though we don't know what's going to happen.

"We just believe in the songs and ourselves and the band, and the recordings we're making are amazing. I just think that things are going to take care of themselves as far as getting the recordings out there."

Despite the DIY bravado, it's pretty clear that it won't be long before this team heads to the big leagues, so get your homemade T-shirts while they last.