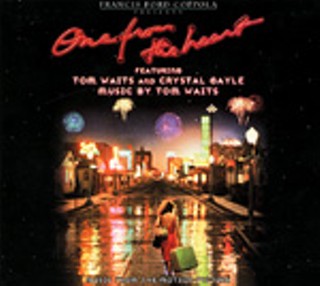 (Columbia/Legacy) It's not that old black magic keeping Tom Waits' original song cycle for Francis Ford Coppola's long-shelved One From the Heart in print since 1982. It's not Waits' barroom, Blue Valentine/Closing Time tunes, nor his wolf-in-sheep's-clothing croon. It's not a piano trio raining goodbyes on "Broken Bicycles," a scarecrow begging you not to disappear on "I Beg Your Pardon," or "Little Boy Blue" snippets of records you played as a child. It's not a pair of "Candy Apple Red" bonus tracks. It's Crystal Gayle. "My son Gian-Carlo brought me a Tom Waits record, I think it was Foreign Affairs," writes Coppola in the reissued CD's liner notes. "It had this beautiful duet called 'I Never Talk to Strangers' with Bette Midler, and I thought, wow, that's a concept! I can have the male voice and the female voice sort of paralleling the protagonists in the story." They tell their own story, actually, the old story: the other side of the romantic fence, straddled by Gayle's Broadway sweep – Streisand, Bernadette Peters, maybe. Curtain calls. The misspent "Wages of Love," soliloquy "Is There Any Way out of This Dream?," wounded "Picking Up After You" – whether it's Waits & Gayle, Gayle & Waits, or just plain Rapunzel combing "Old Boyfriends" out of her trademark tresses, One From the Heart beats with the bloom of its cinematic heroine. Of course Waits fans might chafe at the Crystal clarity of the country music siren's ringing cry, but like the last and best duet on the soundtrack explains, "This One's From the Heart."