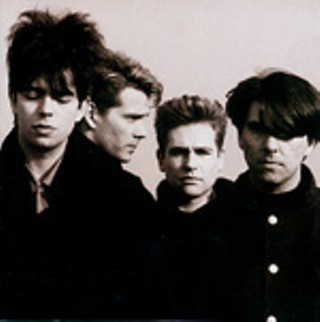 (Sire/Reprise) Authors of one of the Eighties' signature songs in "Killing Moon" and profoundly influential on everyone from Coldplay and Travis to Interpol and British Sea Power, Echo & the Bunnymen's newly reissued first five albums might lead some to wonder if the whole thing was all smoke and mirrors. Others still will recognize the Liverpudlians' progression from post-punk upstarts to orchestral pop sculptors as perfectly natural. Crocodiles, their 1980 debut, illuminates a band clearly in thrall of the Doors and Velvet Underground and not far removed from Joy Division or the Cure; it's kind of a mess. Singer Ian McCulloch alternately rails "see you at the barricades" and screams incomprehensibly as guitarist Will Sergeant impersonates Link Wray and the rhythm section of Les Pattinson and Pete de Freitas kicks up as much racket as possible. Plus, already, a few great pop songs: "Crocodiles," "Villiers Terrace," "All That Jazz." This pattern continues to varying degree across '81's Heaven up Here, whose lasting impression – this means you, Interpol – is obviously "All My Colours," since the reissues throw in two live versions retitled "Zimbo." Porcupine, released in '83, contains the first real departure in the blooming melody of Indian-influenced "The Cutter," but don't discount "Heads Will Roll" or "Clay." The strings and acoustic guitars were out in force for '84's Ocean Rain, which, besides "The Killing Moon," packs the gleaming "Crystal Days" and six interesting live takes dubbed the "Life at Brian's" sessions. 1985's self-titled album is either the best Echo album or the worst, run-ons like "Blue Blue Ocean" butting up against the delectable "The Game," urgent "All in Your Mind," and two alternate takes of Pretty in Pink worldbeater "Bring on the Dancing Horses." In the end, U2 got the glory, Depeche Mode the chicks, New Order the drugs, and Echo the cachet. Not such a bad trade-off after all.