Yodel-Ay-Ee-Oooo: The Secret History of Yodeling Around the World 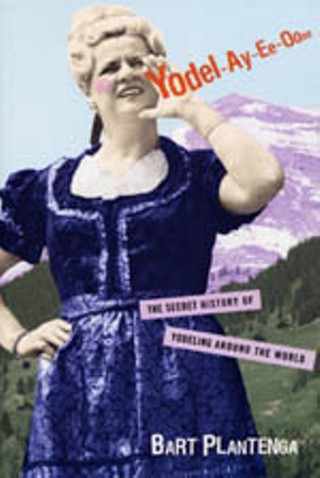 Yodel - Ay - Ee - Oooo: The Secret History of Yodeling Around the World

Yodeling, or jodeling (or jodling, if you must), isn't high up on the list of Pressing Issues of Mankind. In fact, some yodel-phobes are downright hostile to the form; in A Tramp Abroad, none other than Mark Twain noted, "During the remainder of the day, we hired the rest of the jodlers, at a franc apiece, not to jodl anymore. There is somewhat too much of this jodling in the Alps." Still, yodeling aficionado Bart Plantenga manages to present a strong case for throaty singing style, even to the most grimly determined anti-yodel types. Starting off with the physiology that goes into the epiglottal maneuvers of yodeling, he discusses the ancient roots of the yodel in Germany, Austria, and Switzerland. Like many other Teutonic cultural signifiers, the yodel was appropriated by the Nazis for awhile. Contrary to what one might think, yodeling variants can be found in Eastern Europe (Georgia, Albania, Romania), African countries, and practically all of Asia. Plantenga has obviously done his homework, touching on obscurities like Helvetia, W.Va. (population 143), a Swiss enclave in deep Appalachia, Swiss avant-yodeler Christine Lauterburg, New Zealand's Topp Twins (identical-twin lesbian yodelers), and Tarzan's hollering jungle yodel. Of course, there's considerable ink devoted to hillbilly yodelers like Hank Snow, Jimmie Rodgers, Jumpin' Kenny Roberts, and the inevitable Slim Whitman. Austin's own Don Walser is given rather short shrift. A worthy quote from trumpeter Kenny Dorham: "In later years, I heard Charlie Parker yodel on alto saxophone and [Cannonball] Adderley yodel the same melody on his horn." It might be an acquired taste, but Plantenga manages to make the yodel fascinating in a wry and insightful read. Yodeling pygmies in Africa, Tibetan throat-singing, warbling cowboys – there is indeed much more to it than the sturdy Austrian babe on the cover would suggest.