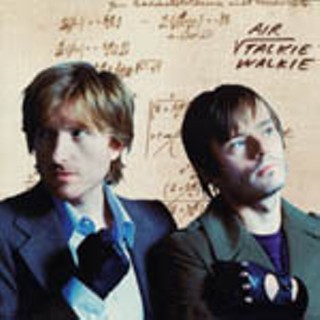 Talkie Walkie (Astralwerks) Calling Air's Talkie Walkie a "make or break" effort is as much an understatement as this duo is French. The band's third proper studio release follows tangents of soundtrack work, as well as the disappointing sophomore LP, 2001's 10,000 Hz Legend. Happily, the still die-hard fans of the duo's minimalist electro-pop can breathe easy: Air has returned with some of their best songs yet. While Legend was a disorganized collage of rubber soul, Talkie Walkie is more a soundtrack of pet sounds. Tunes such as "Cherry Blossom Girl" are patent-pending Air, with glossy female vocals sleeping on a bed of seesaw electronics. This album reminds listeners why Air has been such a natural choice for film scores; they evoke a mood and popping images with their pitch-perfect songwriting. Out of context on Talkie Walkie, the previously released "Alone in Kyoto" sounds like any cinematic love story, not just Lost in Translation. But the songs don't need motion pictures to make them move. "Alpha Beta Gaga" is an instrumental piece that soars with little more than a whistle-blown melody and banjo strings. These elements are ancient, but the textures added by Air make it coolly space-age. That's the beauty of Air at its best, the most primitively infectious sounds are created by the most advanced kinds of technology. You have to be really cutting-edge to sound this old-fashioned. (Air plays the Austin Music Hall Friday, April 2.)