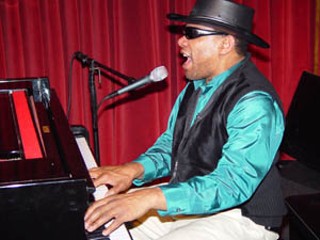 Reed's Jazz & Supper Club, Feb. 3 Reed Clemons is sincere enough, the local restaurateur and owner of Mezzaluna and the Bitter End gliding up his Supper Club staircase. A staircase out of a James Bond movie. Yes, nods Clemons, reaching the second floor landing. The upstairs dining room was modeled after Rick's Cafe in Casablanca – see the drapes? Yes, and the crescent moon bar downstairs ending in a red velvet jazz nook. Jazz was integral to the concept, maintains Clemons. Then you're gonna need a better P.A., and if we're to believe New Orleans' barrelhouse piano tamer Henry Butler, a different brand of ivories. In town being filmed for a documentary, Butler, who is blind, cut his ever-imposing presence between Reed's pair of JBL speakers, showcasing the budding young talent of one of his Austin protégés from the Texas School for the Blind and Visually Impaired. Rachmaninoff, Joplin, Gershwin, Elton John – the youngster sounded as if his playing were being filtered through the vinyl dashboard of a Fifties roadster. The full bar response was enthusiastic nonetheless, if not outright charitable. "That was pretty good wasn't it?" enthused Butler, who then sat down and demonstrated how to manhandle a big black Young Chang piano beast. A pair of James Booker tributes, as gleefully schizoid as the late Bayou Maharajah himself, were a damn fine place to start. Butler's own "Orleans Inspiration," meanwhile – a hand clapper – proved that while jazz enthusiasts might have impeccable taste, they've got a lousy sense of rhythm. "Something You Got," which Butler belted out in his typically bearish style, needed only a few dozen gaping jaws to accompany it. An upcoming South by Southwest showcaser, Butler's 20-year recording career may be scattershot both in and of itself and in terms of wider recognition, but live, he is master and commander – of the right vessel. "This is certainly not the piano Andre Watts played," he remarked.