Rollergirls, Greencards, Tolkien, and rock & roll for credit at UT. What more is there?

Every year a handful of overseas bands showcasing at SXSW are thwarted by various passport snafus, but local bluegrass trio the Greencards learned last week that such incidents are not limited to out-of-towners. Mandolinist Kym Warner and bandmate/girlfriend Carol Young were headed back to Austin from their native Australia, and disembarked at LAX only to discover that, because Warner had previously filed for a change of status to his work visa, his passport was missing a necessary stamp from the American consulate. As Warner was handcuffed and led to a holding cell to await a 17-hour return flight to Sydney, bassist Young had to beg the feds to let her collect her house keys and credit cards from him. "They just can't break the rules for anyone nowadays," she sighs, adding that officials got "a bit of a laugh" from the group's name. Everything has since been straightened out, and Warner is due back in time for the Greencards' show tonight (Thursday) at Zax Plates & Pints – or so Young hopes. "I've got my fingers crossed, because he's got my guitar amp," she chuckles.

The new Fastball album lacks only mastering before its May release on Rykodisc, and according to singer/guitarist Miles Zuniga, is "a real homegrown effort." Zuniga, bassist/vocalist Tony Scalzo, and drummer Joey Shuffield convened at Viewpoint studio in North Austin, where they had their pick of the vintage equipment collected and restored by owner Jack Rock. "A lot of the stuff you'd think would never work, but it does," Zuniga marvels. "We were using amps from 1952 and stuff." He also credits the as-yet-untitled album's "organic" vibe to co-writing the bulk of the songs with Scalzo and to the band's efforts to record as much as they could live. "On our other records we'd end up overdubbing on stuff that was weeks and weeks old," Zuniga says. "It's really hard to create that way." The band will offer a preview Feb. 27 at the Hole in the Wall, which they booked under original handle Magneto USA. "If we billed it as Fastball we could charge more money," explains Zuniga, "but we wanted to do it in a more informal setting. I'm a big fan of just hanging out and playing."

Local post-punk trio Single Frame are still scratching their heads wondering how their 2002 LP Wetheads Come Running got picked up for re-release by Volcom Records, the California label whose best-known act is skate-thrashers CKY. The deal also resulted in Single Frame's being added to 13 dates of this summer's Warped Tour, which confounds bassist/singer Brendan Reilly even further. "I have to admit, we're all, 'I don't know about this,' but it's a good opportunity for us to step in and do something different," he says, before pointing out that Atmosphere and the International Noise Conspiracy are also on the tour. At any rate, he characterizes the one-shot deal as "can't lose," since Single Frame are already well on their way to completing the next record at the Bubble with Chris "Frenchie" Smith. "We throw out our crackpot ideas and he doesn't look at us funny," smiles Reilly. Since they've got several weekend minitours coming up while they wait out being on SXSW standby, Reilly says the group has also been rethinking their road diet. "We've gotta improve it beyond coffee and beer."

Bards of the Ring

How's this for a gig? Austin traditional Celtic duo and unabashed Tolkien-lovers the Brobdingnagian Bards have already released the Lord of the Rings-themed album Memories of Middle Earth, and had their song "Tolkien (Lord of the Rings)" downloaded from MP3.com more than a million times. Now they've been tapped to play the official Oscar-night party for New Line Cinema's LOTR fan club Feb. 29. Bards Marc Gunn and Andrew McKee are currently scouting for sponsors for the trip, which will find them entertaining hobbits, Ents, and elves at the famous Hollywood Athletic Club on Sunset Boulevard. With Return of the King the odds-on Best Picture favorite, Gunn says he expects to have plenty of hobbits dancing on tables, but that the Bards will stick to their traditional kilts instead of more Middle-earth-like garb. "I was contemplating putting on elf ears, but I don't know how well they'll go with my goatee," he muses.

With this year's Austin Music Awards falling on St. Patrick's Day, producer Margaret Moser anticipates plenty of shamrocks and shenanigans; she's particularly proud of the Celtic/bluegrass throwdown between the Greencards and Cluan. "It's my lifelong dream to sneak something like this onstage past my editors," she says. Moser, a proud member and former officer of the Austin Gaelic League, is also planning to outfit several male AMA staffers in ceremonial kilts, although, unfortunately, emcee for life Paul Ray declined. Also scheduled so far are performances by It Band Los Lonely Boys and a "Class of '78" salute to Red River ancestor Raul's, with members of the Standing Waves, Terminal Mind, the Big Boys, and the Skunks. Showtime at the Austin Music Hall is, as ever, 7:55pm sharp. Admission is free with any legit SXSW wristband, which go on sale Feb. 26 exclusively in Austin. Cost is $105 until March 12 or 4,000 are sold, when it jumps to $125. Check www.sxsw.com for locations. 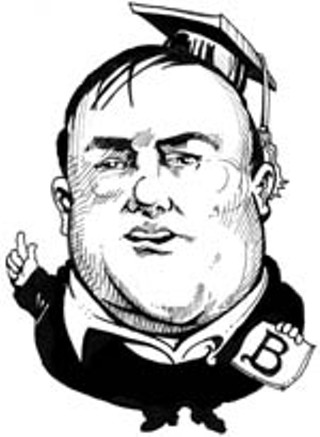 Quick, name a UT course where a typical pop-quiz answer is former Johnny Cash sideman Earl Poole Ball. That would be "The Blues, Race, and Social Change," and while the title sounds typically academic, the instructor doesn't, because he's Clifford Antone. A former Longhorn himself, the blues' local namesake is in his first semester of teaching the Sociology/ American Studies class, which meets twice a week to examine the social impact of R&B and rock & roll. These days it's easy to forget why the mayor of Newark would label this infant music as "full of dynamite," but it makes perfect sense when Antone juxtaposes clips of Elvis and Little Richard with Patti Page's "How Much Is That Doggie in the Window?" Even juicier are the teacher's own recollections, as when a discussion on music and prejudice leads Antone to recount his own long-haired experience: "We would be standing on Guadalupe and frat boys would drive by and throw bricks at us." Future meetings will cover Atlantic Records, Chess Records and Chicago blues, Motown, and New Orleans, and Antone isn't discouraged when only two people in the room have heard of Jimmy Reed. His job is done, he says, "If one kid is inspired to go buy a Muddy Waters CD who didn't know who he was."

There's partying, and then there's partying Texas Rollergirl style. "TCB" and his liver got a healthy dose of the latter Saturday night as the Rollergirls, their dates, friends, and Jason "Wee Man" Acuña from Jackass crammed into new Sixth Street bar Jackalope for the first annual Whammy awards. Peter Elliott & the Sellouts warmed everyone up with punk rock takes on pop favorites like Christina Aguilera's "Beautiful" and Elton John's "Your Song," before yielding the stage to Rollergirl announcers Whiskey L'Amour and Hot Wheels. After a tribute to late "penalty mistress" Amberdiva, the ladies peeled through reams of technical awards (Best Jammer, Best Pivot), but the biggest whoops were naturally reserved for racier categories like Best Ass, Best Rack, and Best Bruise. "TCB" subsequently joined the party posse of Hekill Three and newly minted MVP Dinah-Mite at the Flamingo Cantina for an ass-kicking by Broken Teeth, so the rest is a little hazy. We would, however, like to thank Best Fight winner Rose Royce for donating her sash as a souvenir somewhere along the way. Roller mania starts up again Feb. 22 at Playland, and Friday at Cheapo Discs the Rollergirls will be selling $80 season tickets, staffing a kissing booth at $1 a peck, and banging their heads to Speedloader starting at 6pm.

Enjoy a deliciously decadent Valentine's Day at Elysium Saturday with the Beauty Above, aka native New Yorker Alex Koffler. A pheromonal blend of Ministry-grade metal, Middle Eastern overtones, and seductive synths, TBA's new EP, Lust, is an ideal selection for this most amorous of occasions, and Saturday is Koffler's last local appearance before relocating to L.A. Lust Murder Box follows; cover is $5.

Austin's other all-girl roller derby league, the Lonestar Rollergirls, kicks off their season with Sunday's "St. Valentine's Day Massacre" at Thunderdome, 6106 Baldwin Dr., Ste. B. Defending champs the Rhinestone Cowgirls take on the All-Scar Army, with music by Dale Watson and Wined Up Radio. See www.bggw.com for ticket info.

In a long-expected move, Tower Records filed for Chapter 11 bankruptcy protection Monday. Officials told The New York Times that the chain's 93 stores would remain open and neither customers nor employees would notice any change. Then they burst into flames.

Local fiddler and singer-songwriter Darcie Deaville was recently diagnosed with eyelid cancer. Fortunately, she's insured and expects to make a full recovery, but e-mailed "TCB" to stress that while she doesn't want any benefits, she wouldn't mind a few more paying gigs. "I'll be fine if I can just get myself employed a bit more," she wrote.

Spoon's "The Way We Get By" joins Jet, Doves, and Joseph Arthur on the forthcoming soundtrack to Fox hit The OC. The enhanced CD, due March 30, also contains clips of each song's corresponding scene.