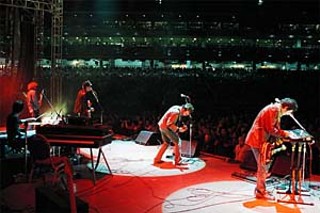 Endochine: This Bud's for you. (Photo By Randy Cremean)

"TCB" should have known it was in for a long Super Bowl weekend when, mired in a 10-mile-long traffic crawl on Houston's Katy Freeway Thursday afternoon, Journey's "Any Way You Want It" was played twice in 30 minutes.

The scene was just as abysmal at the Coors Light SuperBash down the block from Minute Maid Park. A torrential downpour turned a sizable portion of the "main stage" – essentially a tent-covered parking lot – into a massive puddle, and nubile young ladies shilling Cabo Wabo tequila and Jack Daniel's outnumbered paying customers by at least three to one.

The rain mercifully stopped as the Gourds warmed up their Beaumont boogie, so "TCB" headed to a free street festival, The Main Event. Attendance was similarly light, but it picked up noticeably during Molly & the Ringwalds' fun-filled hour of Eighties covers ("Vacation," "Mickey"), though when the skies opened again during their sound check, they missed a golden opportunity for the Eurythmics' "Here Comes the Rain Again."

Friday was infinitely better. Rather than pay another $10 to park downtown, "TCB" stashed its Mustang near the Continental Club in Midtown and paid $1 for a ticket on the new Metro light rail. Several passengers wondered out loud if the train would strike any errant vehicles, which has been a recurrent problem since service started Jan. 1, but no such luck this time.

After a few beers with Houston Press counterpart John Nova Lomax at downtown dive Charlie's, "TCB" headed over to catch Endochine play the Bud Bowl at Minute Maid. Reminiscent of Coldplay with a serrated Smashing Pumpkins edge, the Austin quintet had the unenviable task of entertaining 10,000 restive Staind fans, and delivered admirably, especially on the sinister "Stalker." A subsequent final stop by SuperBash revealed a sizable crowd (at last) and Jerry Cantrell doing grunge the way it oughta be: grinding, dirty, and mean.

The Main Event looked more like Bourbon Street during Mardi Gras as Lomax and "TCB" pushed up front for Los Lobos. The East L.A. institution powered through most of 2002's Good Morning Aztlán before tipping their sombrero to Duke/ Peacock records by quoting Bobby Blue Bland's "Turn on Your Love Light" during "Don't Worry Baby." The real capper, though, was Flaco Jimenez coming out for a divine "Volver, Volver" before frenetic closer "Mas y Mas." The only way to come down from that was to soak up the Ego's-like ambience of Continental manager Pete Gordon's new midtown bar the Big Top.

Saturday, a tuckered-out "TCB" rested until evening, when he and brother John ventured to Barnett Stadium on the city's desolate, industrial southside for the Snooper Bowl, Snoop Dogg's sporadic charity football game. Thanks to their running back "Tank," the Snoop Dogg All-Stars outmatched the semipro Houston Gunslingers, though the one time the ball came near Snoop – aka split end "Boss Dogg" – it was picked off.

The weekend's last musical stop was the Continental for the Gourds, who followed trad-country locals Sean Reefer & the Resin Valley Boys with 90 buoyant minutes spanning from "El Paso" through barnyard blowout Cow Fish Fowl or Pig, and all the relevant Cajun, bluegrass, and medicine-show stops along the way.

Thus a weekend that started out dismally climaxed in an explosion of swamp goodness that made the Bayou City feel like home again. Even Janet and Justin playing peek-a-boob couldn't have made it any better. 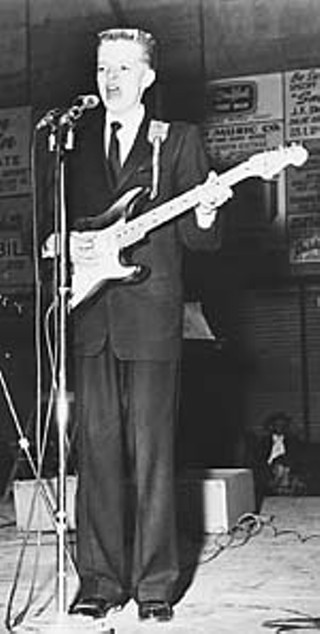 There was no more rockin' cat in the Lone Star State than Ronnie Dawson when throat cancer claimed the "Blonde Bomber" at age 64 last September. The Dallas-bred Dawson was known for classic rockabilly sides like "Rockin' Bones" and "Up Jumped the Devil," but it was Dawson's Western swing bandleader dad who taught him his first licks. In fact, he even toured with the legendary Light Crust Doughboys after his first deal with Dick Clark's Swan Records went south in the wake of the payola scandals of the late Fifties. "Ronnie was a real Texas musician," affirms High Noon and Heybale! bassist Kevin Smith, who played in Dawson's band off and on starting in 1992. "There aren't many of those guys around." Dawson sold out the Continental Club regularly after his mid-Nineties comeback on the heels of well-received albums Monkey Beat!, Rockinitis, and More Bad Habits, and chose the South Congress venue as the site of 1998's Live at the Continental Club. His final gig came last spring at the Continental's Lone Star Rod & Kustom Round Up at Fiesta Gardens; Smith says Dawson was thin and could hardly talk, but was as spry as ever onstage. "It was like the old Ronnie – it was really beautiful," he remembers. "He looked great and sounded great. I've got the video, but I can't bring myself to watch it."

It's like Rock 'n' Roll High School, only without P.J. Soles: The Austin Music Network's High School Battle of the Bands, showcasing 21 bands from area learning institutions, holds its preliminary rounds Feb. 14 and 21 at the Flamingo Cantina from 2 to 6pm. Two to three winners per round will advance to the March 20 finals. All ages (duh).

Feliz cumpleaños to Beerland co-owner Donya Stockton. The club's three-day bash continues tonight with husband Randall doing double duty in the Bloody Tears and Miss Rae & the Royal Family, plus Five-Way Action and John Schooley's One Man Band, and Friday with the Ends, the Cruel & Unusual, the Mood Killers, and Jackie Ono. Dyn-o-mite!

When she's not crooning for Austin indie-pop aces Masonic, look for Leah Bogan slinging drinks at the brand-new Coyote Ugly. Joining her behind and atop the bar will be current Rank and Revue centerfold Lana Lindsley.

After decades of playing Austin so often he might as well live here, former Commander Cody & His Lost Planet Airmen guitarist Bill Kirchen has made it official. Also new to the Travis County tax rolls are East Coast émigrés Porterdavis and Stephanie Fix. Welcome to Texas, y'all.