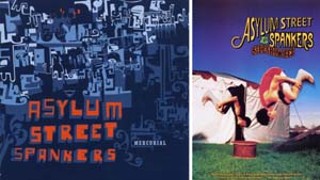 The Asylum Street Spankers are an Austin institution. Who else blends early jazz, hillbilly rap, blue language originals, and acoustic B-52's covers? From humble Wednesday night slots years ago at the now defunct Outhouse and Electric Lounge, to recent tours of Japan, the Spankers have succeeded with creativity, skillful stagecraft, and above all, acoustic musicality. Founders Christina Marrs and Wammo keep the eight-member collective on track with two new discs: Sideshow Fez, a live DVD, and the 14-song Mercurial. The DVD documents a sold-out show last summer at Portland, Ore.'s Fez Ballroom, and features relaxed but effective deliveries of "St. James Infirmary," "Winning the War on Drugs," and "The Scrotum Song." Aside from occasional amateurish screen effects, the concert is presented well, and the sound is excellent. A fine addition is a short video postcard from last year's tour of Japan, including an onstage spanking of the band's translator. To hear the band's soul, however, check out Mercurial. Recorded in a 100-year-old South Austin church, the band performs selections from their bulging set list that somehow never made it on tape. Speaking of tape, in the Spankeresque pursuit of all things old 'n' good, the band enlisted Brian Beattie to document the country cathedral sessions live to two-track, using a Fifties reel-to-reel tube recorder. With assiduous mic placement and analog know-how, Beattie and the band add a rich depth of field and a lifelike recording presence to "Sugar in My Bowl," Taj Mahal's "Going Up to the Country," "Paint My Mailbox Blue," and the Beastie's "Paul Revere." Like its sonic imprint, the playing on Mercurial is simply spanktastic.