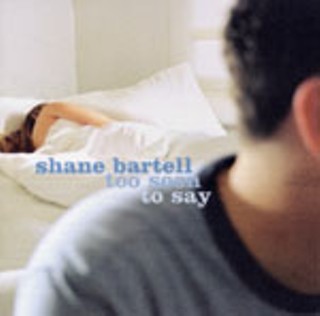 Too Soon to Say (Lilywhite) "Days go by, until someone says it's over." Never one to readily admit defeat, on his first full-length CD, Too Soon to Say, Shane Bartell is so nonchalant he's practically unaffected. Despite every effort to the contrary, he's long past the point of good intentions. Assisted by Marcus Rice, Derek Morris, Darin Murphy, and several others, Bartell's disc acknowledges upfront that love isn't quite as simple as it seems when you're plotting the coordinates from the corner of Sixth and Red River to your latest destination. Too Soon to Say, then, divides its time between foregone conclusions and things that might have been done differently – as if that would help. "There Were Times" documents the uncomfortable period when she's not quite ready to move on, but you are, or vice versa. No proper names, because that would be too personal, but "Long and Short" lays the heart open all the same. Try and come to a favorable conclusion from "Beginning to Believe," but the answer appears "before the words come over the phone." Upon first glance, Too Soon to Say might seem like an irredeemable downer, but for Bartell and accomplices, it's a way to exorcise their late-night demons without diving off into the deep end of an irreversible blue mood. By the final notes, though it may be long after the bars have closed, anyone can understand what it feels like to be spent, exhausted, and yet somehow ready for more.