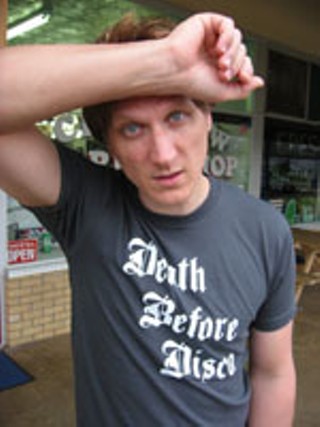 As one of Austin's most talented popsmiths and drummers, whether behind the kit or at center stage, Darin Murphy usually finds himself wanting to be in the other spot.

Murphy admits his first love is and always will be the drums, one of his core "spiritual requirements." He traces his love of the drums to Ringo Starr and tracks his affection for the Beatles – which he's now passing on to his 2-year-old son, Dexter – even further.

"I was conceived right around the time 'I Wanna Hold Your Hand' was number one in the U.S.," he says. "Babies are shaped by what's going on around them while they're still in the womb. It was just Beatles all the time, so by the time I was born it was already there."

Murphy moved to Austin when his then girlfriend, now wife, Sasha, got a job here. Since relocating, Murphy has released 1998's Solitarium and 2001's Haunted Gardenias, and found steady drum work with Shane Bartell, Kevin McKinney, and Patricia Vonne (his current main gig).

"Any time we come together we have a blast," says Murphy of the Machine. "We probably have more fun in rehearsals than any other time. Rehearsals are just a three-to-five-hour gigglefest."