SIMS and Alejandro Escovedo on the mend, plus more hip-hop and SXSW for your shoulder-to-shoulder 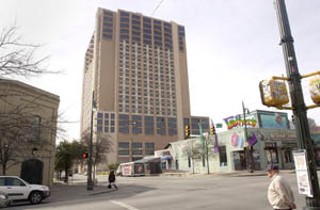 Get ready to hear a lot more from the SIMS Foundation in coming months. The local musician-support nonprofit is launching its "I'm With the Band" campaign, which outreach coordinator Paul Minor likens to a public-radio membership drive. "We're trying to get the message out to people that we're here for them," he explains. The foundation, now headed by new executive director Mary Louise Lopez, is cooking up several profile-raising events, starting with a Grammy viewing party/fundraiser Feb. 9 at the Y Bar & Grill in Oak Hill, featuring a raffle and blues by the Matt Hubbard Band. During SXSW, look for SIMS bumper stickers in the registration swag bags and merchandise stands both at the convention center and strategic locations around the city. Getting with the band is simple: A $20 donation scores a snazzy new T-shirt or tank top printed by Austin's own Billy Bishop; larger offerings bring further rewards like the must-own A Day in the Life CD. Minor says SIMS also plans to step up its partnerships with local businesses and points to Ego's weekly punk rock barbecues as an example of the foundation's new approach to filling its coffers. Conventional benefits, he says, are largely a thing of the past: "We're not gonna have bands play for free anymore."

Though he's not up to talking to the media, Alejandro Escovedo is "in good spirits" and a little less than halfway through his yearlong treatment schedule for hepatitis C, relays business manager Heinz Geissler. "Overall, he's doing good," says Geissler. "He's in the middle of his treatment right now, so there's not much change." To help defray medical expenses, Geissler has enlisted an impressive array of talent, including John Cale, Billy Corgan, Whiskeytown, the Jayhawks, the Flatlanders, Calexico, and Los Lonely Boys, for the 2-CD Por Vida tribute, scheduled for April on Or Music.

Once it was the Texas Mavericks, Timbuk 3, and the Swishbucklers, but now the Hole in the Wall is home to the hottest hip-hop night in town. House MC Tee Double relates that the Drag landmark's Wednesday nights, organized by Rudy Eccles, have him feeling a familiar vibe. "It's kinda like Hip Hop Humpday again," he muses. Moreover, in a little over a month, the crowd has gone from typical Wednesday-night doldrums to what Tee-Dub terms "shoulder to shoulder." Like Humpday, Hole-Hop has a live band and DJ going toe to toe while Double and guest MCs like Bavu Blakes, Mirage, and Traygod Shekhem bring the knowledge. It's actually divided very neatly: DJ at 10pm; band & MCs at 11pm; break; second set; and an open stage at 1am, where anybody can walk in off the street and test their skills. Now, he wouldn't be Tee Double if he weren't doing umpteen other things: readying new album Lone Star, starting a label with funk party producers Mumbo Jumbo, and production work for Blakes' and Mirage's new discs. "If I'm sitting still and doing nothing, I must be sick," he reckons. He's not alone, either, predicting an imminent "explosion" of ATX hip-hop releases.

You can still see Brackenridge Hospital from the corner of Fourth & Red River, but not the state Capitol. The massive Hilton megalith is now open for business, with $99 weekend specials, all set to get those auslanders' ducats flowing into local pockets -- sort of. Though the bar seems destined to challenge the Four Seasons' as the SXSW gossip mothership, the rest of the year, boat shows and bridal fairs probably won't add up to bigger crowds at locally geared clubs like Beerland or the Red Eyed Fly. What they do add up to is property values that are about to shoot up like a bottle rocket on New Year's Eve, which Emo's owner Frank Hendrix thinks could eventually force nearby small-business owners to relocate. "The smartest thing I ever did was buy this club," he figures. A close second was booking burlesque troupe the Suicide Girls, who packed Emo's last weekend: "Now the bathroom in my office is covered in chocolate sauce and whipped cream." Up the street, Room 710's Woody Wiedeman figures his place is safe enough for the time being. "I don't see how our property value can go up much -- you've seen what I have to deal with on a daily basis," he says. "I think the homeless Hilton [new men's shelter at Seventh & Neches] will have a bigger impact."

SXSW novices take heed: A proven hassle-free strategy is singling out one record label and planting yourself at their showcase. This year's options include SXSW warhorses Sub Pop, Touch & Go, Bloodshot, Matador, and New West, as well as Rhymesayers (run by the Atmosphere folks), Definitive Jux, Yep Roc, Mimicry, Relapse, and locals Super Secret, Mortville, and Perverted Son. Then there's the "Rock Against Bush" night sponsored by PunkVoter.org with David Cross and NOFX. During the day, Joan Baez will sit for an interview with Tracks Editor Alan Light, joining Ani DiFranco with Newsweek's Lorraine Ali, and Wayne Coyne with occasional hockey scribe Jason Cohen. Also confirmed for panels are Billboard's Chris Morris, All You Need to Know About the Music Business author Donald Passman, and Late Night With Conan O'Brien booker Jim Pitt. New venues this year include Agave, Bigsby's, Caribbean Lights, Coyote Ugly, Saké on Sixth, and Exodus, all on Sixth Street, and the former Electric Lounge, Tambaleo. Meanwhile, the search continues for a new keynote speaker after L.A. Reid dropped out upon his dismissal as president of Arista Records.

Tip of the Iceberg, Part 2

Could the Cruiserweight kids be any nicer? Despite the Christmas Eve theft of all their gear and merch, spawning several benefits on their behalf, the quartet is still playing the Austin Music Network's fundraiser Friday at the Red Eyed Fly, topping an excellent alt-rock bill of Schatzi, Two Guy Trio, Manatee, and Good in the Sack... This Microwave World and the Octopus Project play one for Austin for Animals Saturday at the Allen Street Warehouse off East Seventh Street. $5 and free beer... Stand up to corporate media tyranny at Rockstars Sunday, as Guy Forsyth, Freakophonic, and Dave's Not Here perform in conjunction with the scheduled Jan. 28 FCC hearing in San Antonio. $5. Joe Ely (l) and David Grissom put their back into it at The Texas Observer's Rabble-Rouser fundraiser last Sunday at La Zona Rosa. The Ely band of Grissom, Jimmy Pettit, Glenn Fukunaga, and Davis McLarty rocked for an hour and a half and were joined by Jimmie Dale Gilmore for Butch Hancock's "If You Were a Bluebird." Noted Bush-baiter Molly Ivins emceed the well-attended event, and spotted in the crowd were Dixie Chicks Natalie "Mrs. Saddam" Maines and Martie "The Pregnant One" Maguire.

s Get your bingo on at the next Chronicle After Hours, Jan. 28, at Flipnotics with H-town lounge lizards the El Orbits, plus honky-tonkers Teri Joyce and Roger Wallace. 6pm.

s Whole Lotta Rodriguez: As From Dusk Till Dawn makes the rounds on HBO, Robert Rodriguez presents a night of Texican sabor Jan. 28 at Antone's, marking the DVD releases of Once Upon a Time in Mexico and Del Castillo Live and the CD launch of Mexico and Mariachis. Scheduled to appear are Del Castillo, Dusk rockers Tito & Tarantula, Rodriguez's sister Patricia Vonne, and his own band Chingon. Proceeds benefit the Make-A-Wish Foundation.

s Someone tell me why: Guided by Voices canceled their La Zona Rosa date last Saturday due to frontman Bob Pollard's back injury the previous night in Houston. No word yet on a makeup date.

s Big ups to Rank and Revue, who put on a hell of a first-anniversary bash at Room 710 last Friday. Sets by Honky, Grady, Amplified Heat, and New Orleans' Hazzard County Girls were almost as hot as the Kozikesque, boob-a-licious poster.

s Locals Endochine have been tapped to open for angst-rock radio kings Staind Jan. 30 at Houston's Minute Maid Park. Other Austinites taking part in Space City's pre-Super Bowl festivities include the Gourds, Jesse Dayton, Asleep at the Wheel, and Vallejo.

s Lo and behold, the first ACL Fest '04 rumor has surfaced, and it's a doozy: the Pixies. If true, this should answer the burning question, "What does a mosh pit full of 35-year-olds look like?"