Jason and Ryan Enright are brothers, homegrown Austinites with an eye on the future. Jason, 30, is a bit stockier, with a head full of dark curls, often round-framed glasses, and a mischievous twinkle in his eye. Ryan, 29 in February, the self-confessed Dylan aficionado, is slighter and quieter. A conversation with him reveals an inquisitive mind.

Until recently, they owned Jupiter Records, a new/used store in Hancock Center that closed Christmas Eve. Since they began with two stores (the South Austin store closed in 2001), you might think heartache accompanied the closings. Wrong. The passing of Jupiter's physical location signals a new beginning for the store, the Enrights having already shifted their focus to what they believe is the next big thing in record retail: selling Austin music online.

"What happened," explains Jason, "was we sat down last June and realized things weren't going to get better for us in the store. Sales were down 30 percent at that point. Basically, we're closing because people don't buy as many CDs as they used to." 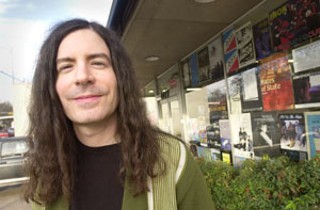 Record stores closing is not big news these days. Ed Christman, retail editor for industry bible Billboard magazine, claims that nationally there were approximately 1,000 such closings in the past 12 months.

"We knew things were changing," continues Ryan. "We looked at our situation and said, 'What can we do to make it good? How do you make it work the right way?'"

Jupiter Brothers, that's how -- a Web site like iTunes. Run by Apple, iTunes allows you to download songs from a selection of nearly 400,000 for 99 cents apiece. The Enrights' Web site ( www.jupiterrecords.com), scheduled to go online this month, will feature music from Austin artists only. The brothers say 100 local musicians have signed on already, and more than 2,000 songs will be available initially.

"We view it as a way to bring Austin to the world," Jason declares. "There's so much music here, and we wanted to be part of that. Our relationship with the Austin music scene has been the most rewarding thing that we've done in the past five years."

For those that missed it, the store hosted a series of in-store performances every Friday. On Dec. 12, Jupiter's five-year anniversary, they hosted an all-night marathon (their second), with 25 local artists playing over 25 hours. Featured were Austin favorites like Carolyn Wonderland, Davíd Garza, Jeff Klein, Gnappy, and Kacy Crowley. 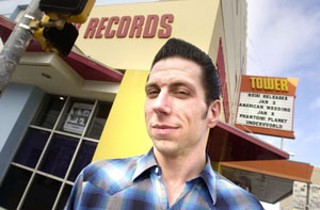 Long before this last waltz, local musicians lined up to play Jupiter Records. For one, the Enrights cared about how things sounded. They built a stage for such events into the store's floor plan, while their positive attitude mirrored the attitude of the local music scene. This allowed them to record many in-store performances, parts of which will be available on their Web site. Last year, they put out Fastball's Live From Jupiter Records CD.

Backstage at the Royal Albert Hall, young Dylan hectors the equally young reporter, talking nonsense and acting belligerent for no good reason, apparently, other than to befuddle a member of "the Establishment." Many have pointed to this confrontation as the genesis of Dylan's "Ballad of a Thin Man," with its refrain, "Something is happening, but you don't know what it is, do you, Mr. Jones?"

That lyric is just as apt today when it comes to the modern consumer and digital entertainment, which is evolving and expanding at light speed. The confusion is understandable from a nontechie point of view with terms and acronyms like MP3, iPod, XM, SACD, DVD+RW, and a whole lot more popping up on a daily basis. Most folks can barely remember what time soccer practice is, much less care why a compact disc plays on their stereo at home, but not in their car or vice versa.

Still, it's no secret there's a sea change happening in the way consumers access not just music, but all media and information. Pundits are already pointing at 2003 as the year, after quite a bit of bumbling, that the first concrete steps were taken toward finally getting it right. To be sure, there are still a lot of ideas, some fantastic, some eminently executable, being punted around on what people want and what they're willing to pay for. Obviously, some will remain as ideas and nothing else.

Nevertheless, the day is coming when all information is stored on one big hard drive. In a nod to Arthur C. Clarke, let's call it HAL. Every movie ever made, every piece of music, every book ever written, every bit of personal information about every person that ever lived will be available with only a few keystrokes on your computer. Only HAL won't even be called a computer anymore. Instead, HAL will be a box connected to the best sound system you've ever heard and a movie-theatre-sized monitor that offers three dimensional images that make it difficult to distinguish between what's real and what isn't. HAL will be a computer, television, radio, library, movie theatre, video game, and a couple of things that haven't been thought up yet all rolled into one. To pay for this, there will be a debit from your bank account at the end of every month for information accessed.

It still sounds vaguely like science fiction even today, but that day is a lot closer than you might think. Samsung Electronics has hinted at such a device and refers to it as Home Media Center. It will allow DVD and digital-music playback, as well as processing and recording live television -- a potential rival to digital video recorders from companies such as TiVo -- allowing your PC to become an entertainment command center. The goal: to centralize digital content at home.

When Apple began selling iPods in October 2001, few predicted the impact it would have on the music industry. Its popularity has thrown into overdrive the move of music from compact discs to portable hard drives. In December, Apple announced iTunes had passed 25 million paid downloads. Now everyone from MTV, Wal-Mart, and Coca-Cola to Rolling Stone and, of course, Microsoft has announced plans for their own online music services.

So it seems the fog has lifted off some aspects of what lies ahead for the music consumer, and it should come as no surprise that one of the more adventurous projects is happening here in Austin, rising from the ashes of a recently closed record store.

One reason given for Jupiter Records' closing was that sales for the past 12 months were down 40%. Compared to local and national reports, that number seems abnormal. Nielsen SoundScan, the firm that tracks music sales, reports that CD album sales nationwide, which make up 96% of all music sales, were down 2% in 2003 compared to the previous year. This December, in fact, sales were 6.1% better than last December.

By comparison, the market for DVDs is in overdrive. While sales figures are difficult to come by, The Hollywood Reporter recently noted, "Revenue from home video sales has increased more than 300%, from about $4.6 billion at the launch of DVD in 1997 (which saw less than $100 million in DVD sales that year) to a whopping $14.3 billion for 2003." Locally, Waterloo Records, Tower Records, Cheapo Discs, and Thirty Three Degrees all report that sales were generally flat or up just a bit in the past year. Talking to any of the principles at these stores -- John Kunz at Waterloo, Jason Shields at Cheapo, Bob Coleman at Thirty Three Degrees, and Dave Mulholland at Tower -- it's amazing how similar their business ideas are, no matter what differences one might experience in their stores.

Each feels that the desire for the "record shopping experience" will never be replaced. Certainly there's something to be said about actually holding an item in your hand before purchasing it or making new discoveries in an interesting environment. Yet these are "record men," folks who still talk of the pleasures of vinyl, who all claim that nothing can take the place of a good selection of music and a knowledgeable staff.

None seems to mind the competition from online monsters like Amazon, all having a Web presence of their own that they say augments overall sales. Being part of a chain, albeit one that's long been on the verge of bankruptcy and/or for sale, Tower's Web site has a national feel since it's in direct competition with the large online merchants. Waterloo, on the other hand, prides itself in stocking local and self-released music that's often hard to find anywhere else. Kunz says the store's Web sales have offset whatever losses they have incurred in-store.

That said, both Waterloo and Cheapo are very concerned about what effect the reconstruction of Lamar Boulevard, scheduled to run from now until spring of 2005, will have on their businesses. Shields thinks his sales might shrink by as much as 75% and is planning a bigger Web presence to help offset losses.

Coleman, meanwhile, says Thirty Three Degrees -- like, say, Alien Records on East Fifth Street around the corner from Waterloo -- serves a uniquely Austin niche. The store offers a decidedly underground selection with an emphasis on indie rock and the obscure, but also features a smattering of everything else from classical and jazz to techno and vinyl.

"I think we prove that if you support the music in this town, people recognize that and support you as well," says Coleman. "It's a quality-of-life thing, one of the reasons people choose to live in Austin."

Asked how the store is doing financially, Coleman answers that things are doing better, though 2001 was particularly rough, and after five-plus years of business in its current Guadalupe location, they're in it for the long haul.

So are many record stores at this point, even if the Enrights believe the costs involved with running such an operation are unnecessary. Their Web site will spotlight exclusive content, from in-stores to rare and/or unreleased offerings depending on the artist. They also plan to promote live shows with the possibility of culling material from them as well.

Pointing to the closing of at least 11 local record stores in the five years since they started at Hancock Center as a trend that's only going to continue, Jason Enright has only high hopes for what lies ahead.

"What we have in mind is the future of retail," he enthuses. "It's not going to happen overnight, but if we didn't try this right now, we'd be very sorry about it later." Everything Must Go
Tower's last hours