Gimme whatcha got for a poke chop…

Los Lonely Boys, who impressed new pal "Stone Cold" Steve Austin by stomping a mudhole into an Austin Music Hall full of New Year's Eve "reptiles" (at least according to our Music editor), could end up having an even bigger 2004 than their meteoric 2003. After moving 60,000 units of last year's self-titled disc, the trio's label Or Music, which is owned by Sony, has struck a deal with sister label Epic that has the big dog handling all promotion and distribution while the product itself continues bearing the smaller label's stamp. This means an even bigger national profile for the brothers Garza, who had Sony brass eating out of their hands during a November showcase at NYC's Roseland Ballroom and were featured on the Dec. 26 installment of NPR's Morning Edition. "You can't dream it up any better," affirms their manager, Kevin Womack, who says the earliest to expect San Angelo's favorite hijos back in the studio is late summer, after tours with Willie Nelson and Robert Randolph and a TV date or 200. Speaking of, look for Ringo, Jojo, and Henry on Austin City Limits 7pm Saturday on KLRU.

2001's Friday After Next featured a larcenous Santa to hilarious effect, but what happened to local alt-rockers Cruiserweight Christmas Eve is no laughing matter. Maxwell siblings Stella, Urny, and Yogi were set to leave for Dallas -- literally pulling out of the driveway -- when they noticed their gear trailer was cracked, and not long after, empty. "They took my drums, Urny's Les Paul, both cabinets and heads, all our mics, and our T-shirts and CDs -- pretty much everything," inventories Yogi. He figures the band's net loss at between $20,000 and $25,000, with little hope of compensation. Nevertheless, the three siblings and bassist Dave Hawkins have reported the serial numbers to the police and are combing pawnshops just in case. "We've heard people don't get anything back," admits Yogi, "but maybe someone was stupid enough to sell it here." Their friends in Dynamite Boy have organized a benefit featuring both bands at the Back Room Jan. 18, with more to come. Cruiserweight had yet another run-in with bad luck when a computer crash cost them the mixes to their new album, though the basic tracks were unaffected. Maxwell reckons the four will wrap things up this month with an eye toward a late-spring/early-summer release, despite the 13-song LP still lacking a title. "Stella hasn't figured that out yet," he allows.

Though not as prevalent as the flu, the breakup bug was pretty busy over the holidays. Presumably some time after it actually happened, news filtered down in late December that Ünloco has gone the way of the dodo. The Austin metal muchachos ended their relationship with Maverick Records after making noise on Ozzfest's second stage this summer, and apparently went their own separate ways soon thereafter. Even former publicist Melissa Dragich isn't quite clear on the terms. "Nobody ever told me the word 'dropped,'" she says. "I don't know if there was an option that didn't get picked up -- who knows with record companies." Though 2003's Becoming I didn't exactly Godsmack the charts, bone-splintering single "Bruises" has surfaced everywhere from the Matrix: Reloaded soundtrack to video game True Crime: Streets of LA, with the local quartet receiving recent glowing write-ups in hesher bibles Circus and Metal Edge. Dragich says she's seen now-former frontman Joey Duenas around L.A. a few times, but "I have no idea what the other three are up to." Back on Red River, the Eastside Suicides have parted company for unspecified reasons, while bassist/singer Candi Licious is no longer a member of raucous punks Slum City, though singer/guitarist Suzy Slum says she'll continue in some capacity with guitarist Yancey Pants and drummer Chuck City. The rule of three thus satisfied -- no more for a while, OK?

While the rest of Austin was bundling up for a long winter's nap, the South by Southwest Music Festival was slipping 400 invitations into the mail. Creative Director Brent Grulke says the current count is around 700 (see below), with the final mid-March tally coming in at more than 1,000 out of a record 7,000-plus applicants. That number includes the 213 bands that hail from somewhere other than the U.S. of A: plenty of the British Isles and greater Europe as usual, but a strong contingent from Down Under, Mexico, India, and China to boot. Grulke says he's hearing loads of emo, pop punk, and Radiohead clones, and that dance-driven Eighties pop à la New Order is back in a big way. "I hear a lot of bands using that as a jumping-off point, and I hope those jumping-off points are leading to something new," says Grulke, "but the overall quality level of talent is exceedingly high this year." Also exceedingly high is the number of Austin-based acts that applied this year -- 698, not counting Pflugerville -- and Grulke is quick to express confidence that the festival's traditional homegrown ratio of at least one-fourth the total will be intact. Many of those performers may not hear for sure until mid-February or later, but Grulke says to take heart because "the last deadline is always the day of the show."

Besides Tears for Fears, here's the complete list of who's invited to SXSW 04:

There are no secrets during an election year, so anyone at the Austin Music Hall Saturday for Willie Nelson's all-star Dennis Kucinich fundraiser knew backing-band anchor Stephen Bruton's late-night Saxon Pub gig was the place to be afterward. Sure enough, the local guitarist treated the packed South Austin armory to a two-hour jam with his flame-haired six-string soul mate Bonnie Raitt (who also showed up the next night at Bruton's Resentments gig), plus guests Eric Johnson, Michael McDonald, Mickey Raphael, and Marcia Ball. Who needs stumping when the Saxon's thumping? 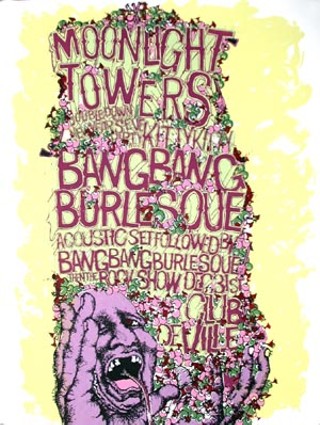 Come see a plethora of Austin poster artists' personal picks for their finest work of 2003 at the next Chronicle After Hours, 6-9pm, Wednesday, at Speakeasy. Up-and-coming Mix-rockers Parade perform, Cuba Libre supplies free snacks, and donations benefit Austin Lyric Opera's Armstrong Community Music School. If it's your poster that deserves an Austin Music Award, it's not too late to enter. E-mail the Chron's Dan Hardick at luvdoc@auschron.com, and/or follow the instructions to post it on our Web site. Further chances to appreciate this largely unsung facet of the local music community coming soon.

Scruffy soul-shouter Scott H. Biram links up with hillbilly metalhead Hank Williams III for a six-week tour starting next week in Little Rock. Monday is the last chance to catch Mr. Lo-Fi Mojo at the Parlor until March, though the duo has penciled in a stop at Stubb's Saturday, Jan. 18.

Taking a cue of sorts from Jupiter Records, Austin don't-call-it-pirate radio station KAOS 95.9 has moved operations online to www.kaos959.com. The station, whose primary mission is "to promote the Red River music scene," plans to add dial-up lines in the future, but is currently reachable through a high-speed connection and iTunes or Winamp media players.

They may not have frenching pop stars (or will they?), but the Austin Music Network's first-ever Video Awards do have the Dixie Chicks squaring off against Trail of Dead for Best Live Video and a mind-boggling 17 acts up for Best Rock Video. See who takes home the gold for those and six other categories (Comedic Video, Latin Video, Hall of Fame Video) 9:45pm Monday at the Alamo Drafthouse Downtown -- tickets now available at the box office -- and make your picks known at www.austinmusicnetwork.org.

In further music-related Alamo news, Goldman Sachs house band the Yuppie Pricks, presently working on their sophomore manifesto at the Bubble, have been tapped to open for Office Space at the downtown theatre Jan. 22. Besides having cash-stuffed printers on hand for people to abuse, the Pricks will debut new OS-inspired single "Damn It Feels Good to Be a Yuppie." However, they still haven't turned in their TPS reports.

Flier of the week goes to this fine reproduction of 1985's Catching Up With Depeche Mode, hyping Elysium's tribute to the Sussex synth pioneers 9:30pm Friday. Look for plenty of pleasure little treasures and some great rewards for sure.