"TCB" promised readers more details on the Matt Meshbane/Caucus Club falling-out last week, but as expected, those details are little more than the nightclub version of he said/she said. Meshbane thought the venue wasn't giving his bands their fair share of the purse, and took issue with the owners occasionally adding their own bookings to his shows. For his part, owner Aaron Dorrington says many bands Meshbane booked failed to generate enough bar revenue to justify the $2 cover, and that some failed to show up at all. The two also disagreed on whether or not to offer bands a guarantee, which Dorrington thought would help attract better-drawing groups and thus bigger crowds, and Meshbane thought would lead to higher door prices and keep people away. Not surprisingly, both parties are eager to put the situation behind them, with Dorrington lining up prospective new bookers and Meshbane moving on to Rockstars, where he hopes to launch a "take back Sixth Street" campaign with a run of no-cover shows.

The proper response to reports of a reuniting Joe Ely Band is, naturally, "Which one?" The JEB circa Live Shots, Live at Liberty Lunch, or Live at Antone's? (It can't be the Flatlanders, who are already back together.) This time it's the middle one: the 1986-92 lineup of Ely, guitarists David Grissom and Lloyd Maines, bassist Jimmy Pettit, and drummer Davis McLarty. "I just thought I could talk everybody into playing a free gig," says McLarty, who's enlisted his former mates for the Texas Observer's third annual Rabble-Rouser Roundup fundraiser Jan. 18 at La Zona Rosa. "We'll see if anyone remembers what that band was all about." Smart money says they will; also appearing are Grupo Fantasma, Jimmie Dale & Colin Gilmore, and Terri Hendrix. Tickets are $25.

Austin punk lionesses the Applicators have a good-sized local following, temporarily including original Jackass Johnny Knoxville, but across the pond they rocked the BBC Radio 1 stage at this summer's Reading and Leeds festivals. "People knew who we were, which was weird," admits singer Sabrina Ewing. Besides hanging out with MTV2 A-listers the Yeah Yeah Yeahs and Hot Hot Heat, the ladies enjoyed a flattering spread in venerable British rag NME. The quintet, who've added guitarist Cookie Renn since coming home, also spent time at London's Two KiloHertz studios, the last place Joe Strummer -- who's buried in an adjacent churchyard -- recorded before his death last December. Now that they're home, most recently from an East Coast jag with the Epoxies, the band plans to hit the studio next month to begin work on the follow-up to 2001's What's Your Excuse, and hopes their fans are ready for a slightly different sound. "We've let go of a lot of the punky stuff," Ewing says. "We're not fighting the pop so much anymore." Catch them Friday at Room 710 and Saturday at the Emo's benefit for ailing employee Antonio Bond.

Carrie Clark loves country music, but as she recently found out, she's no country singer. The former Sixteen Deluxe frontwoman went to Seattle last month at a high school friend's invitation to do some recording at his studio. Though the program included originals and covers of Sandy Posey and Skeeter Davis songs, the end result surprised even her. "It's not country at all," she says. "Or it's as country as Mazzy Star can sound country." Clark, who made the trip while both Via Satellites bandmates Kevin Whitley and Matt Hovis tended to new babies, says she hopes to pester Tight Spot Records owner Chuck Stephens about releasing it. With the Satellites due to change their name as the current one is already spoken for, Clark's psych-pop trio also has a brand-new four-song demo (and soon-to-be EP), produced by Cotton Mather's Robert Harrison. Seek it out Jan. 16 at the Carousel Lounge when the Satellites orbit Fivehead and Stickpony.

Say hi to Will Sheff if you see him over the holidays, because the Okkervil River frontman doesn't figure on being around much next year. Not only did the local alt-folk quartet just get back from three months on the road -- including a month in Europe -- 2004 is currently shaping up to be Sheff's Year of the Van. "It's that time in your life when you feel like you need to move to the next level," says Sheff. Soon to be free of both a day job and permanent address, the intermittent Chronicle contributor is now ready to hole up with friends in Bloomington, Ind., (site of Okkervil label Jagjaguwar) for a writing holiday before again hitting the road. Sheff reports their just-concluded tour, which found Okkervil crisscrossing the States with the likes of Clem Snide, Califone, the Mendoza Line, Songs:Ohia, and Austin's Zykos, was "alarmingly good." All except the last show, that is, which he missed due to a near-accident on an icy Kansas highway. "I'm glad to be back in the land where things don't happen very fast and I'm not in grave danger," the singer says. For now at least. 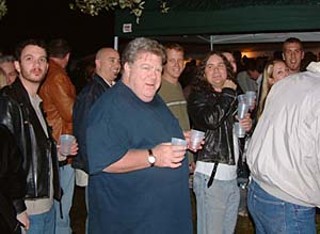 Nobody was a bigger scenester this past weekend than former Cheers barfly George Wendt. In town for the Alamo Drafthouse premiere of his new movie King of the Ants, the actor showed up at the Chronicle holiday party Friday, where true to character, he seldom strayed from the beer line and even worked the kegs for a spell. The next night, he hit Emo's to say hi to Rocket From the Tombs buddy David Thomas. Wendt stood down front as Thomas lectured the crowd on proper etiquette ("Don't throw things") before stalking off. Cooler heads eventually prevailed, and RFTT soon returned to throttle their would-be tormentors with 90 minutes of menacing Midwestern prepunk. Having almost as much fun as Wendt was Sons of Hercules frontman Frank Pugliese, spotted dancing like a teenager during "Sonic Reducer." In Sunday's New York Times, after helpfully pointing out that it's "not all twang" down here (gee, thanks), senior pop critic Jon Pareles goes to church on Explosions in the Sky's new The Earth Is Not a Cold Dead Place, calling the local instrumentalists "the American answer to Sigur Rós." Pareles, who had to wait in line with all the other peons at Explosions' SXSW Mercury show, later salutes the Dixie Chicks' new live album and DVD. Meanwhile, a recent Village Voice credits the Spiders with inventing the new genre "metalglam." "The advantage of being metalglam is that you can take it as a given that you're to be stagy, showy, and ridiculous," writes Voice scribe Frank Kogan. And that's the way it is. What if ELO were in charge of your church Christmas pageant? Last Thursday at the Erwin Center, the Trans-Siberian Orchestra offered one possible answer, bringing seasonal standards like Tchaikovsky's Nutcracker suite into the realm of power chords and drum fills. The second show since completion of the arena's $55 million renovations -- a new UT basketball practice facility, posh new private suites, and improvements to the arena's fire-safety systems -- the TSO spectacle was a fine demonstration of the improved lighting and sound systems, though the 6,000 patrons in attendance fell well short of the venue's all-time attendance record of just over 17,000, set by Fort Worth's own John Denver in 1978.

• Shades of "Angry All the Time": Monte Warden's song "Desperately," co-written with "Angry" author Bruce Robison, has been chosen as the next single off George Strait's Honkytonkville.

• Voodoo Customs, a bike shop at 3900 Woodbury, is hosting a benefit for parts manager and former Saucer/Cadillac Voodoo Choir member Xavier Murel Saturday at 2pm. Live music, barbecue, and a raffle are planned; donations accepted at the door.

• Chronicle contributor and King of All Austin Media Andy Langer is again heading to the News 8 Austin roof to host a daily holiday music series from the likes of Johnny Goudie, Kacy Crowley, and Rick Trevino. Segments air daily through Christmas Eve; check www.news8austin.com for a full schedule.

• On a slightly self-promotional note, "TCB" begins its 29th year on the planet tonight (Thursday) and plans to celebrate at the Moonlight Towers/Milton Mapes show at the Parish, and sobriety permitting, Zykos at the Continental. Y'all come!