All I wanted for Christmas was satellite radio, but I couldn't wait.

In October, I broke down, got one, had it installed, paid $156 for a year's subscription, tuned in and turned on. Now all I want for Christmas is a satellite radio in every car and in the house and a lifetime subscription.

See, I'm a radio nut. As a kid, I walked a mile every Wednesday to KFJZ 1270 in Fort Worth to get the Top 40 survey hot off the presses. I've remained involved with the medium ever since. (For starters, I'm a regular Monday guest on the Kevin & Kevin show on KGSR-FM). So when I say satellite radio has changed my life, you need to understand what kind of life it is.

Until satellite, my fixation with radio meant knowing way too much about Rush, Sean, and all the frothing right-wing shouters who dominate the AM band and being too intimate with the tics of Brad Messer, Jim Bohannan, Carl Wiglesworth, Jim Rome, Tony Bruno, and La Ranchera de Monterrey. (Disclosure No. 2: I am not a Libertarian). Now, with 100 channels to choose from, those characters have vanished from my life. So have bad infomercials for miracle joint medication.

Instead, I channel-hop from three jazz stations, an all-jam channel, channels dedicated to nothing but the blues, folk 24-seven, bluegrass, and global hip-hop to various shades of contemporary and alternative rock, country, reggae, and world music, National Public Radio, Public Radio International, Bloomberg, and the BBC. Not long after I got satellite, I drove from Austin to Houston to Fort Worth in the same day. I could've just as well gone on to Amarillo.

In one 15-minute stretch, I heard Doug Sahm lamenting about not going back to Austin anymore, John Coltrane blowing "My Favorite Things," OutKast doing their version of the same song, "Jet Song" from West Side Story, and the latest news from Radio New Zealand. I even finally "got" French chanteuse Edith Piaf as she warbled her way through "Accordeoniste."

My obsession began in 1999 when I cornered Mark Cuban, then one of two founders of Broadcast.com, a collection of radio stations on the Internet, after he gave the keynote address at South by Southwest Interactive.

"I love hearing all these different radio stations from all over the world online," I told him. "How can I do that in my car?"

Cuban related how the Federal Communications Commission had licensed two companies to establish satellite radio networks, which would broadcast from outer space to the whole nation and give listeners a far broader selection of choices than existed on the AM and FM bands. Theoretically, it was the radio equivalent of subscription satellite television.

Cuban and his partner Todd Wagner subsequently sold their business to Yahoo! and became billionaires. I followed up Cuban's tip, invested heavily in the two licensed companies, Sirius and XM, and lost my ass when the high tech bubble burst.

Since then, both XM and Sirius managed to stay solvent, launch satellites, develop receivers for consumers, and in the past couple of years become real radio networks. XM has the lion's share of the market -- 1 million subscribers to Sirius' 150,000 -- largely because it had a one-year jump getting product into stores and has stayed ahead with innovations such as a device that allows listeners with Sirius radios to dial up XM, too. The FCC has ordered both companies to develop radios compatible with either service.

Still, tech glitches, the considerable expense of buying and installing a satellite radio, and my bad financial bet kept me away until I was offered a next-to-nothing deal for a Sirius Plug & Play radio this fall. Three hundred dollars later, it's a brand-new bag.

Plus, since I vote with my pocketbook, the considerable investment by Clear Channel, the San Antonio-based company that has choked creativity in radio, in XM and the involvement of Lee Abrams, the radio programmer credited with turning free-form progressive rock radio into a highly structured, highly profitable format known as AOR ("album-oriented rock") 30 years ago, sealed the Sirius deal.

Sirius has two Plug & Play models you can insert into "docking stations" at home and in other cars, but the signal from the Audiovox I purchased first was getting "stepped on" by all four of the available frequencies one tuned in to in order to pick up the satellite signal. When I complained to Sirius, I was offered the Kenwood Here2Anywhere Plug & Play. The signal conflict is resolved because the Kenwood has a direct FM modulator, though the smaller screen makes it more difficult to read what's playing, which is one of the biggest plusses of both satellite services.

Eventually receivers on the market will be cheaper and pick up both Sirius and XM signals, which the FCC has mandated. It's going to take several years' worth of new cars with factory-installed satellite radio for the concept to be fully embraced.

As much as I have come to enjoy Talk of the Nation, The Splendid Table, The Savvy Traveler, Whad'ya Know, and Wait Wait ... Don't Tell Me! -- all fare from NPR and PRI not heard on local affiliate KUT-FM -- the music channels are the big difference. The six hip-hop stations have exposed me to nuances of the street that have previously escaped me with solid jocks stringing the mixes together. The five dance channels, particularly the rave channel, are guaranteed uppers whenever I need an audio pep pill. The three classical channels and the jazz, swing, show tunes, and bluegrass channels are my top choices for sonic wallpaper as I cruise.

Sirius has turned me on to Jet, a hard-banging band from Australia; Krishna Das' grooving chant "Kashi Vishwanath Gange" on the Horizons world beat channel; cool dance remixes of Nina Simone; and Iggy Pop redux now that he's in heavy rotation with Sum 41 on several channels. I've heard more Tim Hardin, Richie Havens, Ramones, Sex Pistols, and Clash in the past month than I have in the last decade. Then there's Lou Reed's live, barn-burning version of "Rock N Roll," Lucinda, Chris Duarte, Omar, Lou Ann, Wayne the Train, and Marcia Ball more than once.

It's not perfect. I'm already burned out on "Take Five" on Pure Jazz, and anything by the Pet Shop Boys. Although the Radio Mexicana channel and Planet Hip-Hop do a good job covering contemporary Latin sounds, there ought to be room for a Tejano channel like there is on XM. The talk channels could use some fine-tuning. The audio feeds from Fox, CNN, CNBC, and the Weather Channel don't translate well, and as engaging as the BBC is, the UK POV isn't always my cuppa tea.

Satellite radio won't kill terrestrial radio. Even though I've found several variations of what I'd describe as KGSR's adult-alternative format on Sirius, including Organic Rock, the Trend, the Bridge, Folk Town, and the Border, none has a Kevin & Kevin, Jody Denberg, a Sam & Bob, a Dudley & Bob, or a Buck on sports. Truth is, traffic reports, news, weather, and local flavor just can't be done effectively from national headquarters in New York or Washington, D.C., where XM broadcasts from.

Similarly, as much as I enjoy NPR and PRI programming (caveat: Morning Edition and All Things Considered are not part of NPR's Sirius package), I still prefer Aielli, Ray, Monroe, Trachtenberg, Ferguson, the departed Dan Foster, and the rest of the KUT music gang programming my sounds. They're shining examples of why Austin radio doesn't sound cookie-cutter if you know where and when to listen.

Local will always trump national with me. I do hope satellite puts pressure on Clear Channel, which owns one of every 10 commercial terrestial stations in the nation, including KVET-FM, KVET-AM, KHFI, and Z102, to ditch their cookie-cutter programming mentality that envisions a KISS-FM in every city with the same jock as host instead of emphasizing programming that reflects the city they're broadcasting in.

But if they don't, that's not my problem anymore. I like what I'm hearing when I'm driving. You don't have to take my word. Log on to www.sirius.com and www.xmradio.com and check it out. Just remember, the first listen is free. The subscriptions aren't. 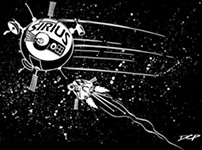