[French accent] Listen very carefully… I shall say this only once… 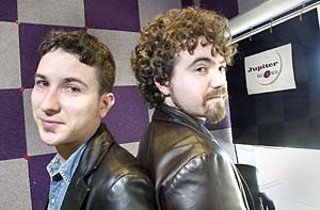 It may be the end of Jupiter Records as Austin knows it, but the Enright brothers feel fine. That's because they've cooked up a plan to increase the scope of the locally geared store: Move it online. "The goal is to bring Austin music to the world," says Jason Enright. He and brother Ryan will start by reconfiguring JupiterRecords.com into a sort of clearinghouse for local music; Jason says he hopes to have the site up by the end of the year, with more than 100 Austin acts on board. This means the demise of the brothers' Hancock Center store, but not before this weekend's "25 Bands in 25 Hours" in-store marathon marking its five-year anniversary. "I think we're perfectly positioned to do this," says Jason, who plans to continue staging live events after the store closes Christmas Eve. "People could see it as a negative change, but it certainly doesn't have to be."

6am: Mari and Jacob

7am: Gays in the Military

Free beer, coffee, and doughnuts will be available at the appropriate times. No cover.

It isn't quite the Beach Boys, who were in town Thanksgiving week to play Texas-based broadcasting monolith Clear Channel's holiday bash (complete with trucked-in sand), but plenty of pickers 'n' singers will be on hand to serenade shoppers at the Austin Music Hall's annual Armadillo Christmas Bazaar, Dec. 11-24. Hours are 11am-11pm every day, with music 8-11pm weekdays, 12:30-11pm weekends, and 2-11pm Christmas Eve. 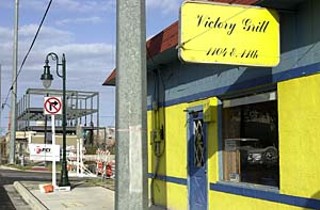 Big changes are swirling around Austin's longest-running continuously operated live music venue, the Victory Grill. Despite numerous attempts, "TCB" was unable to contact manager R.V. Adams, although someone at Victory Grill Entertainment confirmed Monday their current lease has been revoked. One scenario has control of the bona fide landmark at 1104 E. 11th St., still owned by the family of late founder Johnny Holmes, going back to Eva Lindsey, who oversaw the grill's late-Nineties resurgence. Stay tuned.

E.R. Shorts, the local blues musician whose promising career was hamstrung by substance abuse and trouble with the law, died in his sleep at his North Austin home last Friday. The cause was unknown, though Shorts, 40, had cleaned up and was on medication for a stroke suffered last year. Shorts moved to Austin in 1989 to play bass for Ian Moore, before becoming a Sixth Street staple with his own high-energy group. "He didn't think he did a good show unless he was completely drenched and did the splits five or six times," says Malcolm Welbourne, who produced Shorts' lone CD, 1994's Texas Sunset, and plans to organize a local tribute. The Richmond, Texas, native had just debuted a new band Nov. 29 at Fitzgerald's in Houston, the site of some of his earliest shows. Copies of Texas Sunset are again available at Waterloo Records, with part of the proceeds going to Shorts' sons Enrique and Ennis Jr.; a funeral is tentatively scheduled for Saturday in Richmond.

The Texas Grammy office got more than it bargained for when more than 800 Lone Star performers entered the Recording Academy's statewide demo contest. Judges whittled down the mountain of entries to 10, with finalists, including Austinites Matt the Electrician, Adam Garner & Liz Pappademas, and building g, converging on Houston's Engine Room this Sunday to see who takes home the $10,000 prize as part of an all-day music-biz seminar. Speaking of Grammys, the 2003-04 nominations were announced last week, and only about half of Texas artists' 28 nods went to Beyoncé and Ray Benson. Two guys named Lyle and Willie did pretty well, and congratulations to Marcia Ball for a nod in the Contemporary Blues album category for So Many Rivers. See www.grammy.com for the complete list.

Frank Hendrix, whose stewardship has taken Emo's from death's door to packed houses for the Yeah Yeah Yeahs, the Distillers, and Death Cab for Cutie, thinks the next musical hot spot is, of all places, Hot Springs, Ark. Seriously. "It's like Taos without all the adobe," he says. "It reminds me of Austin in the Seventies." Hendrix, already a Hot Springs homeowner, recently made an offer on a nearby lakefront eatery with visions of an outdoor amphitheatre -- an idea that came to him after talking to some kids who had driven 7 1/2 hours from Hot Springs to Emo's. "There's a lot of young people up there craving [music]," he says, pointing out that Hot Springs is only three hours from Dallas and four from Memphis. Closer to home, Hendrix recently received an offer to buy a nearby local club, but declines to name names as the current tenants aren't yet aware that their establishment is on the market.

Max Dropout, editor and publisher of online zine Let Them Eat Lead, isn't one to mince words; for instance, he calls the White Stripes' universally adored Elephant "a regurgitated piece of shit" that recycles Jack White's work in earlier bands like the Upholsterers. Born Max Fuller 26 years ago in Venice, Calif., Dropout moved to Austin earlier this year after becoming disenchanted with the "poisonous" NYC scene and simultaneously falling in love with the Crack Pipes, whose frontman Ray Pride told him, "If you want to see us play, you're going to have to move to Austin." Though the first thing he did was break an ankle at the Motards reunion, Fuller has nothing but good things to say about his adopted home. "It's scary how large the talent pool is here," he says, citing Scott H. Biram, Walter Daniels, John Schooley, and the Kodiaks as local must-sees. Look for a new issue this month at www.letthemeatlead.com.

Due to an extremely acrimonious falling-out with the club's owners over money, Matt Meshbane is no longer booking the Caucus Club. "I am so out of there," vows Meshbane. More next week.

Members of the Travis County Sheriff's Department will be collecting toys for their Brown Santa program Sunday at the Vibe from 7pm-2am. Cover is $2 with a toy, with music by Hao Chiang Chiang, Left Out, Cicada 17, Tombstone Union, Vinyl Dharma, and maniFesto.

New supergroup Lifestory, featuring A.J. and Alex Vallejo, serenades the next Chronicle After Hours shindig, scheduled for 6-9pm Tuesday at the Saxon Pub. It's free, but donations to benefit Armstrong Community Music School of Austin Lyric Opera are encouraged.

With more than 5,000 songs considered for the Chronicle's recent "Top Texas 40" feature, we were bound to leave a few out, and sure enough, we did: "Longview," the ode to self-gratification that launched Green Day, and "Commerce, TX," a standout from Dallas wunderkind Ben Kweller's fine 2002 LP Sha Sha.