Texas in the Title

23 "Long Tall Texan," Murry Kellum
Songwriter: Henry Strezlecki
Year Released: 1963
Highest Billboard Chart Position: No. 51
The Sixties were the golden age of cornpone, and Murry Kellum's "Long Tall Texan" rates just below better-known tunes like Ray Stevens' "Ahab the Arab" and Sheb Wooley's "Purple People Eater" on the guffaw-o-meter. Some have theorized "Long Tall Texan" would've been a bigger hit if not for the Kennedy assassination's chilling effect on funny songs about Texans with guns. Lyle Lovett resurrected it for 1996's The Road to Ensenada.

22 "Under the 'X' in Texas," Johnny Gimble
Songwriter: Johnny Gimble
Year Released: 1976
Highest Billboard Chart Position: none
In 1976, master swing fiddler Johnny Gimble established himself as the go-to session man in Nashville. First distinguishing himself nationally as Bob Wills' fiddle and mandolin player in the Fifties, Gimble was ready to settle down and let the work come to him. He sure missed Texas, though, so utilizing map imagery to illustrate his longing, Gimble wrote this sprightly song. Now 76, Gimble resides in Dripping Springs and still plays regularly.

21 "At the Crossroads," Sir Douglas Quintet
Songwriter: Doug Sahm
Year Released: 1969
Highest Billboard Chart Position: none
A lot was going on in Doug Sahm's life during the success of "Mendocino," and his personal concerns were often revealed in lyrics. Estranged from his beloved home state, he sang what may be the most heartfelt lines in any of his songs, inspiring critics to ignore the "Texas in the Title" rule and vote the song in. And who are we to argue with the sentiment, "You can teach me lots of lessons, you can bring me lots of gold, but you just can't live in Texas if you don't have a lotta soul."

20 "Texas (When I Die)," Tanya Tucker
Songwriters: Bobby Borchers, Ed Bruce, Patsy Bruce
Year Released: 1978
Highest Billboard Chart Position: No. 5
Upon its 1978 release, 19-year-old Tanya Tucker's TNT had all of Nashville aflutter with its overt rock aspirations and sexy gatefold pinup. While the album failed to break Tucker as a rock artist, it did spawn a lasting country classic with "Texas (When I Die)." Tucker realizes she may not go to heaven when she dies, but as long as the Almighty lets her go to Texas, she won't complain.

19 "Good Texan," the Vaughan Brothers
Songwriters: Nile Rodgers, Jimmie Vaughan
Year Released: 1990
Highest Billboard Chart Position: none
"Do it to me like I know you could, so I can do it to you baby like a Texan should." The grand tradition of Lone Star braggadocio reaches a new level of macho oafishness with this lyric. Only a vocalist as laid back and assuredly un-self-conscious as Jimmie Vaughan could pull "Good Texan" off without playing it for hardcore prurience or cheap irony.

18 "Texas in My Rear View Mirror," Mac Davis
Songwriter: Mac Davis
Year Released: 1980
Highest Billboard Chart Position: No. 9
Some people have to leave Texas to figure out they love it. Such is the case with the restless protagonist in this Mac Davis classic. Feeling he'll wind up in jail or dead if he doesn't escape Lubbock, he sets out for Hollywood, thinking happiness is "Lubbock, Texas, in my rear view mirror." But L.A. turns out to be tougher than he thought, so he returns to Lubbock with a renewed appreciation for his hometown.

17 "The WASP (Texas Radio and the Big Beat)," the Doors
Songwriters: John Densmore, Robbie Krieger, Ray Manzarek, Jim Morrison
Year Released: 1971
Highest Billboard Chart Position: none
"I love the friends I've gathered together on this thin raft," muses Jim Morrison. "We have constructed pyramids in honor of our escaping." Said raft sinks like a stone under the weight of turgid spoken lyrics about brightly feathered Negroes and blues-rock bloat. This is hardly the high point of L.A. Woman, the Doors' last album before Morrison's death. Nevertheless, "The WASP (Texas Radio and the Big Beat)" has become a Two-for-Tuesday staple, especially in the state it name-checks.

16 "Screw You, We're From Texas," Ray Wylie Hubbard
Songwriter: Ray Wylie Hubbard
Year Released: 2003
Highest Billboard Chart Position: none
While not quite as direct as the Loco Gringos' infamous T-shirts, Ray Wylie Hubbard's "Screw You, We're From Texas," from this year's Growl, works simultaneously as a rebellious middle finger and a celebration of Texas music. Hubbard growls the praises of Willie, Stevie Ray, and the 13th Floor Elevators over a swampy, blues-rock choogle. Highlights include snare shots punctuating the Dallas and Waco reference, and Hubbard's dismissal of the other 49 states with the line, "I don't care if I ever go to Delaware anyway."

15 "Memories of East Texas," Michelle Shocked
Songwriter: Michelle Shocked
Year Released: 1988
Highest Billboard Chart Position: none
The cover of Michelle Shocked's 1988 breakthrough, Short Sharp Shocked, is a news photo of her being dragged away by San Francisco police during a fair housing protest. The bucolic "Memories of East Texas" reconciles the pain of being an adolescent outcast with a bittersweet lyrical mix of fondness and frustration familiar to anyone who ever felt compelled to flee their hometown.

14 "The Eyes of Texas," Milton Brown
Songwriter: John Lang Sinclair (lyrics)
Year Released: 1903
First sung at Austin's Hancock Opera House on May 12, 1903, at a minstrel show to benefit the University of Texas track team, the origin of UT's official song is a legend in and of itself. According to the Handbook of Texas, John Lang Sinclair wrote "The Eyes of Texas" to the tune of "I've Been Working on the Railroad" at the behest of his roommate, UT band director Louis Johnson. The song instantly became a campuswide smash and has since been played by everyone from Kostelanetz to Elvis. 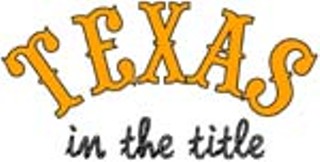 13 "Texas Me," Sir Douglas Quintet
Songwriters: Doug Sahm, Frank Morin, John Perez, Augie Meyers
Year Released: 1969
Highest Billboard Chart Position: none
It's hard to imagine a more poignant expatriate's lament than "Texas Me." Doug Sahm was one of many musicians who fled Texas for San Francisco during the Sixties, but he never stopped celebrating his home state. "Texas Me" combines Augie Meyers' swirling organ with steel guitar, fiddle, and Sahm's homesickness as he asks, "I wonder what happened to the man inside, the real old Texas me?"

12 "Luckenbach, Texas (Back to the Basics of Love)," Waylon Jennings with Willie Nelson
Songwriters: Bobby Gene Emmons, Chips Moman
Year Released: 1977
Highest Billboard Chart Position: No. 1
Oddly enough, this song represents the one and only appearance by unofficial state musician Willie Nelson, who sings backup here, on the Top Texas 40 chart. Moreover, "Luckenbach, Texas" wasn't written by Waylon, Willie, or the boys. It was penned by famed Memphis producer/songwriter Chips Moman and his American Sound Studios house band organist, Bobby Emmons. Nevertheless, the song's success in the summer of '77 put Luckenbach on the map. Souvenir-seeking thieves have been trying to take it back off ever since.

10 "Texas Tornado," Sir Douglas Quintet
Songwriter: Doug Sahm
Year Released: 1973
Highest Billboard Chart Position: none
More tornadoes touch down in Texas each year than in any other state. While the tourist bureau would pooh-pooh this statistic by saying it's only because of Texas' overwhelming land mass, true Texans take a perverse sort of pride even in the state's most terrifying natural disasters. Doug Sahm illustrates this on the much-loved title track of his second and final album for Atlantic.

9 "The Yellow Rose of Texas," Gene Autry
Songwriter: Unknown
Year Written: 1836
Highest Billboard Chart Position: No. 1
Legend has it that this 1830s folk song was written about Emily D. West, an indentured mulatto servant of James Morgan, an entrepreneur settler of the lowlands east of present-day Houston. On April 18, 1836, Santa Anna's troops captured West as they moved into the area to battle Sam Houston's army. Santa Anna became so enamored of West that he left his troops vulnerable to Houston's surprise attack. West's alleged carnal distraction made her a "sung" hero of Texas independence. Some historians now say the song had nothing to do with West, but the legend lives on.

6 "T for Texas (Blue Yodel No. 1)," Jimmie Rodgers
Songwriter: Jimmie Rodgers
Year Released: 1927
Country music as we know it began in 1927 when RCA Victor A&R man Ralph Peer recorded Jimmie Rodgers singing the country-blues hybrid, "T for Texas" in Bristol, Tenn. The million-selling song, re-recorded at the Victor studios in Camden, N.J., introduced America to Rodgers' trademark "blue yodel" and catapulted him to a fleeting stardom that was cut short by the Depression and his death from tuberculosis-related complications in 1933.

5 "That's Right (You're Not From Texas)," Lyle Lovett
Songwriters: Lyle Lovett, Willis Alan Ramsey, Alison Rogers
Year Released: 1996
Highest Billboard Chart Position: none
"That's Right (You're Not From Texas)" hasn't been around long enough to be deemed classic, but it's definitely a contender. Lyle Lovett takes us on a westward swinging ride through Texas musical history that touches on a wide array of cultural signifiers. There's the zealous transplant in an ill-fitting hat, the out-of-state girlfriend who just doesn't get Texas, and the reference to Uncle Walt's Band, to name a few. The title might strike non-natives as arrogant, but as Lyle himself so amicably concludes, "Texas wants you anyway."

4 "Waltz Across Texas," Ernest Tubb
Songwriters: Ernest Tubb, Quanah Talmadge "Billy" Tubb
Year Released: 1965
Highest Billboard Chart Position: No. 34
One of country music's best loved performers, crisp, Texas-born Ernest Tubb started out yodeling like his idol Jimmie Rodgers but eventually developed his own unique vocal style while plying his trade in honky-tonks across the South. Tubb's twang-laden drawl and the faraway steel guitar on "Waltz Across Texas" capture the fleeting nature of passion, adding pathos to the memorable lyric, "Like a storybook ending, I'm lost in your charms."

3 "Texas Flood," Stevie Ray Vaughan & Double Trouble
Songwriters: Larry Davis, Joseph Scott
Year Originally Released: 1958
Highest Billboard Chart Position: none
"Texas Flood" is best known today as the incendiary Albert King/Jimi Hendrix-style workout that introduced Stevie Ray Vaughan to the world beyond Texas in 1983. However, the song's history goes back to 1958, when Arkansas-bred Larry Davis cut the original version with Fenton Robinson on guitar for Don Robey's Houston-based Duke-Peacock label. Opinions vary as to which version is definitive, but Texas can proudly claim both as milestones in electric blues.

2 "All My Ex's Live in Texas," George Strait
Songwriters: Lyndia Jean Shafer, Sanger D. Shafer
Year Released: 1987
Highest Billboard Chart Position: No. 1
Combining shades of Western swing with a clever, sing-along lyric, "All My Ex's Live in Texas" is one of George Strait's most memorable hits in a career filled with them. The Hill Country native approaches the song good-naturedly, refusing to go too deeply into why Allison from Galveston or Dimple from Temple turned on him like Texas weather, but one gets the unspoken sense that more than one thrown plate hastened our hero's Tennessee flee.

1 "Deep in the Heart of Texas," Gene Autry
Songwriters: June Hershey, Don Swander
Year Released: 1941
One of the first things Texas schoolchildren learn is to clap-clap-clap-clap along with "Deep in the Heart of Texas." June Hershey wrote the lyrics and Don Swander wrote the music to the song in 1941, and it was No. 1 on Your Hit Parade for five straight weeks in 1942. Tioga, Texas-born Gene Autry's version, featured in the movie Heart of the Rio Grande, remains the definitive version of the song, though Bing Crosby, Bob Wills, Ella Fitzgerald, Woody Herman, Duane Eddy, Ray Charles, George Strait, and countless others covered it.