Kickin' ass and takin' names (for later litigation) with Gibby Haynes, Spoon, Masonic, the Tuna Helpers, and President Bush himself

"A surreal experience" is how Austin City Limits producer Terry Lickona describes his trip to Washington last week to accept the National Medal of Arts on the show's behalf, the first time a television program has been so honored. Lickona and the other members of the KLRU party -- Ed Bailey, Evan Smith, Bart Knaggs, and Maury Sullivan -- were ushered into the Oval Office for a brief encounter and photo op with ACL fans George and Laura Bush. "We just love Austin City Limits!" the first lady told Lickona. "I used to serve beer at the tapings in 1974," to which George the Younger interjected, "I was probably drinking the beer." (The only time Lickona knows of Dubya visiting ACL was as governor, when he showed up to chat with vibes great and family friend Lionel Hampton.) The KLRU folks and fellow honorees, including George Strait, Buddy Guy, and Ron "Opie" Howard, were later feted at a full state dinner. "Everybody was glomming onto Ron Howard more than anyone else," says Lickona. "George Strait snuck out pretty early." Back in Austin, it's business as usual for the PBS staple, with the Joe Nichols/Jessica Andrews episode on tap for this weekend. "We're not going to bask in the glory of the medal for too long," swears Lickona. "It's locked up in the accounting department right now."

If a rolling stone gathers no moss, what does a Butthole Surfer do when his band is on "quietus"? If he's Gibby Haynes, he recruits fellow Surfer Nathan Calhoun and ex-Pariah mates Shandon Sahm and Kyle Ellison for a new outfit called Gibby Haynes & His Problem, which debuts at the Back Room this Saturday. Far from a side project, Haynes intends to record an album in December and January before going on tour with Ween next spring. "It's what I'm doing now," the recent NYC transplant insists.

TCB: What made you want to start up this band?

Gibby Haynes: Why, what do you suspect? It's just sort of the flow of what I've been doing for the last 20 years. ... Some sort of musical outlet, I guess, since the Buttholes aren't that active right now.

GH: It goes from real spacey, kinda jammy stuff to real cheap rock & roll. There's one song that's about as low-down and cheap as you can get, called "Redneck Sex," that's real fun to play.

GH: [chuckles] We're on "quietus." Which really isn't hiatus. It's been real hard to get the band together to play live shows. I can see us recording some stuff in the future.

TCB: Thanks for your time.

GH: I wish I could be funny or something, but better luck next time. I'm getting ready to go into Kinko's and copy medical records. I got bit in the face by Nathan's dog the other day. 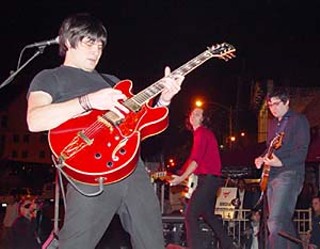 Trail of Dead singer/guitarist Conrad Keely slashes his way through a song last Thursday as bassist Neil Busch (center) and guitarist Kevin Allen try to keep up. Although a TABC rule prevented the local agit-noise foursome from performing on the roof of Sixth Street's Shadow Lounge as originally planned -- resulting in the scrapping of rooftop staples "Get Back" and "Where the Streets Have No Name" -- the band substituted a crackling cover of "The Electric Co." from U2's first album Boy. Yeah Yeah Yeahs singer Karen O munches the mic in front of a sold-out crowd at Emo's Sunday night. The NYC trio got off to a slow start, but climaxed in a flurry of angular pop-punk and O's spastic contortions that delighted the many similarly dressed "Karen-abees" in the audience. Before they dropped into Emo's, the YYYs hit South Congress hipster haven Factory People for a little last-minute emergency clothes-shopping. 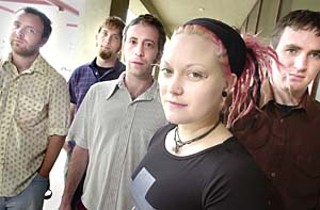 The first indication that local quintet Masonic are serious about what they do is the presence of a kegerator in the foyer of their studio behind Rock n Roll Rentals off South Congress. They decided to invest in the beer-dispensing device after realizing they were in danger of being buried under a pile of empties, but it paid off in spades during the gestation of sophomore disc Too Far. Too Fast. Too Soon. "All sorts of things happened to us," says guitarist John Mason. "Putting this thing together wasn't exactly easy." First, Leah Bogan and Mike Norfleet stepped in after the band's original singer and bassist departed last fall, then there were a near-fatal hard-drive crash and various inevitable personal dramas. Having their own space allowed Masonic to work at their own speed, however, and a borrowed Fender Rhodes gives Too Far an even warmer ambience than the melancholy pop luster of 2001's Never Stood a Chance. It's also an almost documentary-style look at the goings-on that make up Austin's fertile music scene. "I like to do lyrics so whoever's listening can apply them," notes keyboardist Kevin Mason. "There's a certain intentional ambiguity." Since Saturday's CD release at Emo's with Canoe, Swiss, Schatzi, and Coco Candissi doubles as Kevin's birthday bash (brother Brian rounds out the crew on drums), that means another in a series of epic after-hours blowouts. "Last year at Kevin's birthday, the keg was floated before we even got there," laments Bogan. This would be funnier than the Jessica Simpson/Chicken of the Sea thing if it weren't sadly true. In the dubious tradition of Mattel vs. Hotwheels Jr., the long arm of corporate America has reached out to slap another Austin band with potential litigation. On Nov. 4, local performance-art cutie pies the TunaHelpers received an e-mail from foodstuff behemoth General Mills' lawyers saying their name infringes on the copyright belonging to GM subsidiary Betty Crocker's boxed pasta mix. Furthermore, the letter informed the band that if they didn't change their name within 30 days -- and nevermore refer to themselves as even "formerly the TunaHelpers" -- the company intended to file suit in GM's Minneapolis home base. "I thought it was a joke," admits big Tuna Adrienne Sneed, who says she's perplexed because, "our name is one word, plural, and theirs is two words, singular." Sneed has since spoken with attorneys, who agree that "People don't go to Emo's looking for a boxed noodle product." She hopes to resolve the situation in typically whimsical Helpers fashion: "I'd like to wrestle Betty Crocker, and [drummer] Khattie Q can have a thumb war with the Hamburger Helper hand."

Subset is back from their tour -- barely. Guitarist/vocalist Lindsey Simon says the local college-rockers were beset by hypothermia, "sleeping-bag brawls," payment in Jägermeister, and stampeding Democrats on their 10-day outing, but made it home Monday (relatively) safe and sound. "A little blood loss, nothing too bad," Simon says. Their van wasn't so lucky, blowing out a tire on a bridge near Lafayette, La., which also took out the gas tank.

Earthpig has decided to retire his swinish pseudonym, which he's employed since the mid-Nineties days of Earthpig & Fire. Henceforth the quirky singer-songwriter will appear under his given name of Adam Bork.

Local band the Phenomenal Cats will perform the entirety of the Kinks' 1968 classic Village Green Preservation Society 9pm, Friday, at the Carousel Lounge. For those in a country frame of mind, Fort Collins, Colo.'s Drag the River visits Beerland a little later in the evening.

"TCB" takes next week off as the author enjoys some much-needed downtime in Houston and East Texas, but will return Dec. 4. Happy Thanksgiving and go Horns!