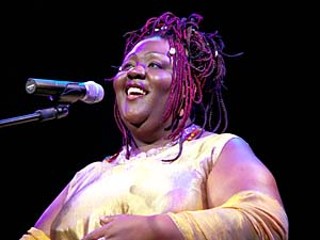 One World Theatre, Nov. 2 How appropriate that the sublime Brazilian vocalist Virginia Rodrigues should make her Austin debut at the One World Theatre. Perched in the craggy hill country landscape, the theatre sits like a holy place reaching to the heavens in hopes of drawing creative spirits into its acoustically pleasing modest space. When Rodrigues' enchanting voice wafted from the One World stage during the second of two sets last Sunday, it was as if the gods said, "Yes, this is where the divine comes to visit Earth." Singing entirely in Portuguese, Rodrigues' beautiful voice is understandable in any language. While it seems like overcooked praise to say her voice is incomparable, in this case, it's simply the truth. Singing selections from her new disc, Mares Profundos, Rodrigues delved into the classic Afro-Samba song cycle first made popular in the Sixties by Brazilian music legends Vinícius de Moraes and Baden Powell. Backed by cello, guitar, percussion, and a flute/sax player, Rodrigues' profound voice moved from majestic contralto in "Lapinha" and "Canto de Xangô" to an ethereal soprano in "Canto de Iemanjá" with jaw-dropping effortlessness. Sung only with flute accompaniment, "Iemanjá" was perhaps the most stunning display of her celestial high notes. Contrasted with a moody cello accompaniment on "Lamento de Exu," Rodrigues electrified the space with her otherworldly glide from deep, mossy notes, to that pinprick sharp soprano that breaks through the sky like a shaft of sunlight through menacing clouds. If there was something to complain about, it was only that Rodrigues was easily distracted. Her jewelry, her shawl, her shoes, and her undergarments were annoyances that often caused her to check out of the performance space. And while she occasionally allowed herself to groove to the music, she mostly sang directly to the audience. Even with this surprising display of stage awkwardness, Rodrigues' voice provided a satisfying feast for the senses, and surely, a most worthy offering to the gods.