Rise of the Machines

Marc Bianchi takes his Space Holiday in the Velvet Rut 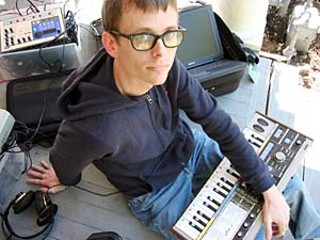 It's like a tractor beam emanating from the funnest corners of Austin: the Velvet Rut. You move here with big dreams and peach fuzz, and before you know it, five, 10, 15 years have gone by, and you never did write that book, get that law degree, meet the person with whom you'd start a family and an organic garden. You've been having so much fun playing disc golf and basking at Barton Springs that you didn't notice the gray creeping in while you happily procrastinated. Maybe there's something in the breakfast tacos.

"Things that would've taken me a couple of days to do took me a month, because you wake up hungover and when you feel better in the evening, it's time to go out again," says Marc Bianchi, the wizard behind Her Space Holiday, now in its seventh year.

Bianchi, a 30-year-old with tattooed fingers and heavy black eyeglasses that help disguise his indie kid on the scene status, moved to Austin from the Bay Area a year ago this Halloween and has since experienced the velvet rut firsthand. It's easy to do in a city of enablers having just as much fun as he is.

The reason we meet at his house on this fine Thursday morning is so he can give me a guitar lesson. Bianchi leads me to the screened-in back porch of his Hyde Park rental. Over cigarettes and coffee, conversation settles on Bianchi's move and the past year.

"I was making enough from [HSH] to actually live anywhere but the Bay Area. So, when we were touring, me and Keely [Bianchi's longtime girlfriend and sometimes collaborator] kept our sights on towns we liked. Austin was always the most receptive, plus American Analog Set, Gloria Record, and Explosions in the Sky are all here. We thought it was the natural place."

Much has changed for Bianchi since he moved to Austin. For starters, he left his longtime label, Tiger Style, when his contract ran out, which was almost like a breakup.

"I owe a lot to Tiger Style," acknowledges Bianchi. "They opened up a lot of doors. I think we just reached a point. ... They weren't into the new record, and it was the first thing I was really excited about.

"At that time, I was talking to Mush [Records] about doing the vinyl for it, and I sent them the record. They really, really liked it, so I thought it was just time.

"It was one of the hardest decisions I've ever had to make, because [the people at Tiger Style] are my friends. What I learned is that you can't get so incredibly personal when it comes to stuff like this."

The new album, released by Mush, is very, very sad in its thematic makeup: death, broken hearts, and professional frustration. That's not a great departure from Bianchi's previous work, but there's one key difference. While the musical mood on 2001's Manic Expressive matches the melancholy lyrics, The Young Machines glides on newfound musical buoyancy.

"Lyrically, this record is way darker than anything I've ever done, but the melodies and the music aren't such a downer. Things that are sad bring me down like anybody else, but you have to understand that it's all part of the process -- taking joy even in the really shitty stuff. Because that's what the best moments come out of. That's what I wanted to do with the record, deal with things I was trying to express, but at the same time give it a more optimistic feel. They're more lullabies, comfort."

Another, more painful change in Bianchi's life, and one that's explored in heartbreaking detail on The Young Machines, is an actual breakup -- with Keely, something that brought both blessings and heartache.

"My creative process relied so heavily on her, and I second-guessed myself so much, so it's been a learning experience for us to be separated," he says candidly.

The upshot of the breakup is that Bianchi's been afforded the opportunity to collaborate with different musicians. Added to the Her Space Holiday mix are bassist Kenneth Holland of local rockers Attack Formation, and Bay Area hip-hopper Hanni El Khatib, who did the fluid cover art for The Young Machines.

"It's been really fun because it's been a long time since I collaborated with friends," admits Bianchi. "It was very singular when I'd make music, which is good and bad. It's good to have control, but it also gets so one-sided. Having them there and adding to the live set has just changed so many things for the best and made things a lot more lighthearted."

We get up from the table so Bianchi can give me a tour, as well as introduce me to Hanni and Kenneth, who are goofing off in Bianchi's bedroom/recording space. Moving through the living and dining areas, which boast hardwood floors and vaulted ceilings, we're engulfed by the quirky artwork that lines the walls. Obscure foreign electronica magazines litter the tables in the common area.

The dining room functions as a temporary practice space, with a drum kit, keyboards, guitar, bass, and MPC machine crammed into the limited square footage available. We don't even touch the guitar, although a sneak peek at the Scotch-taped fakebook on the keyboard reveals programmed directions for each song.

He leads me through the kitchen, where he has some sheets of Big Chief-style paper secured by magnets on the side of the fridge. They bear a childish scrawl, which tells stories like, "I am a piece of wrapping paper. They used me to cover part of a present. I get torn. I am sad." Or, "I am a candle. I give them light at Christmas. It is sad." A third story is a bit more philosophical: "I wish I was Chewbaca."

The bedroom is separated by an invisible line: rumpled bed on one side, what seems like a wall of knobs and screens on the other. With this setup, Bianchi can hop up in the middle of the night, throw on some headphones, and record an entire song without disturbing his roommate or neighbors. A copy of AP magazine sits on the bed; the cover story is on Aesop Rock, which sparks a heated debate. Bianchi and El Khatib are fans, Holland not so much.

"I hate Aesop Rock!" he exclaims. "There are other people who do the same thing he does, only faster and better."

"Hey, Kenneth," ventures Bianchi, "have you ever heard of the velvet rut?"

For Bianchi, it's a slightly different, happier, "Chewbaca"-type story. The velvet rut -- among other things -- is what has sustained Her Space Holiday through trying times, personally and professionally, despite the fact that the upcoming show at the club formerly known as the Mercury is Bianchi's first non-SXSW gig in his adopted hometown since moving here.

"Before I signed to Mush, I was thinking of stopping because I was so unhappy with the years repeating themselves, and I didn't see new options," reveals Bianchi.

"Now, with this new shift, it definitely seems like everything's starting over."

For today, though, the rut has claimed us all. Before we know it, two hours have passed and we all must go about our business. Perhaps I'll get another shot at that guitar lesson. After all, there's always tomorrow.

Her Space Holiday opens for the American Analog Set at the Parish, Saturday, Nov. 15.