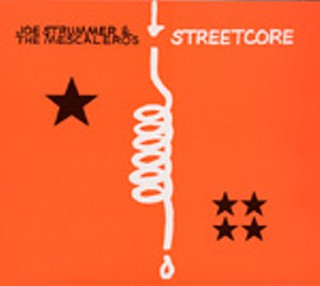 Streetcore (Hellcat) With the passing of Joe Strummer, 50, from a heart attack Christmastime 2002, punk's musty coffin looked primed for its final rusty nail. Thank goodness, then, that Mescaleros Scott Shields and Martin Slattery polished off Strummer's final studio effort. Reaching from beyond the grave, the Clash's formidable ex-frontman smashes that pine box to pieces. Streetcore isn't exactly London Calling, but with his sweet, ragged voice sounding as strident as ever, Strummer improves on such hit-and-miss affairs as 1999's Rock Art and the X-Ray Style. Beats, Bourbon Street, and Johnny Cash inform Strummer's casing of America, both in celebration and rage. Über- producer Rick Rubin takes the controls for Dylanesque marvel "Long Shadow," originally penned as a submission for the Man in Black, as well as a heartrending version of Bob Marley's "Redemption Song." "Ramshackle Day Parade" reminds us why we'll forever crank up the Clash, while the Gallagher brothers won't mean shit. Strummer's prescient cover of New Orleans songwriter Bobby Charles' "Grow Too Old" (retitled "Silver and Gold") forms a fitting coda. "It'll take a lot of prayers to save my soul," Strummer sings merrily, "and I got to hurry up before I grow too old."