Explosions in the Sky Reviewed

The Earth Is Not a Cold Dead Place (Temporary Residence) 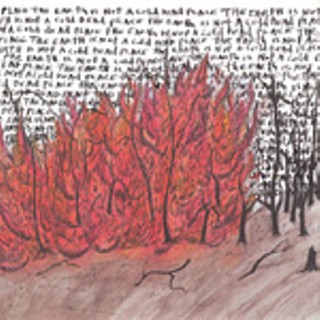 The Earth Is Not a Cold Dead Place (Temporary Residence) Walk toward the light. Past bipolar youth (How Strange, Innocence), through volatile maturity (Those Who Tell the Truth Shall Die, Those Who Tell the Truth Shall Live Forever), and into the radiance of totality. Taking its "First Breath After Coma," The Earth Is Not a Cold Dead Place wakes like dawn, guitars streaming down liquid sun, heartbeat bass and a revelry beat calling life to consciousness. Brighter and brighter blinds the sky, shades of the spectrum never even glimpsed by the human eye, which blinks back its retinal eclipse. Nine minutes later, the third stone from the sun explodes with life. It's this light that bathes Explosions in the Sky's third LP. Similar purity falls like snow on "The Only Moment We Were Alone," a more conventionally structured narrative of figure eights, snow angles, and two hearts beating as one. Here the meditative gives way to the ecstasy of grandeur, soaring like a soul set free. Eight minutes in, there's the explosion of creation. The tones and the story told -- wordlessly throughout -- are exquisite. As is the entirety of The Earth Is Not a Cold Dead Place. "Six Days at the Bottom of the Ocean," documents downed Russian nuclear submarine the Kursk with a heartbreaking, sonar loneliness, taking on a subatomic weight once its origins are revealed and the imagination lives and breathes on its ringing bell tones and cymbal wash. Eight minutes later, the pounding on the hull ceases, sliding right into the churchlike meditation of "Memorial," which beats its breast before the Rapture. Fifth and final symphony, "Your Hand in Mine," glistens in waves, the tide rolling into the lagoon of emotion. The passion of connection grips this final scene, as the light slowly fades. Infernal darkness, The Earth Is Not a Cold Dead Place.

Explosions in the Sky, The Earth Is Not a Cold Dead Place