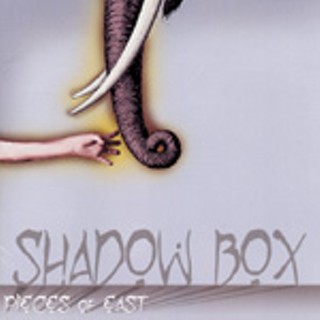 Shadow Box Looking at their recent trophies, Pieces of East is a veritable supergroup. At the 2003 Austin Music Awards, members of the formerly monikered Shadow Box landed AMA nominations for acoustic guitar (Anuj Timblo), female vocals (Laura Giammona), miscellaneous instrument (Abhinit Bhatt, tabla), and Musician of the Year (bassist Pat Cieply). The Austin quintet also picked up nominations for best none of the above, pop band, and rock band, ultimately taking home the prize for best world music. Not too shabby for being a year old, but how's the debut? Thanks to Mark Hallman and his Congress House Studio, the 11 tracks herein are deliciously crystalline. Drummer Will Kidd didn't get an individual AMA nod, but signature tune "Jimmy and the Elephant" demonstrates he's clearly the band's bonding agent. In addition, the group's blend of Eastern timbres and Western structures spotlights Giammona, whose voice is as graceful as figure skating swans. The problem with Shadow Box is that the majority of the tunes inhabit the same midtempo range; variations in subject matter and instrumentation don't keep them from sounding alike. Giammona's restraint is worthy, but her pipes demand cutting loose. She holds back too much on "Realize," where the composition would be better served if she sang up the chorus. Nevertheless, it's been a great year for Pieces of East, and their debut -- a worthy document of their many accolades -- only solidifies that.