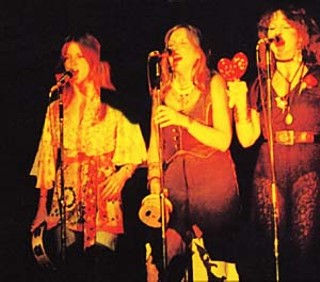 Lynyrd Skynyrd wasn't hip in 1976. The band sold millions, but it wasn't cool. My ears were tuned to local blues, away from the last gasp of progressive country and the prevailing sound of Seventies rawk. My younger brothers listened to Skynyrd in all its fist-pumping, lighter-holding, beer-bellied glory. I razzed them, yet I secretly loved "Sweet Home Alabama."

Nov. 28, 1976. Promoting their double live album One More From the Road, Skynyrd played the Armadillo in a show so crowded it would be shut down by the fire marshall today. The classic sixpiece lineup plus a new guitarist and the recently added Honkettes, who were eye candy as well as backup singers, filled the stage. I remember very little except for the glorious, sweating, steamy, stomping finale of "Sweet Home Alabama."

Backstage, promo photo in hand, I asked for autographs for my 16-year-old brother Bill. Bill had requested rock star autographs to prove his sister really was a rock journalist. Artimus Pyle and Leon Wilkeson hunkered in the hall, Billy Powell relaxed in the dressing room with Steve Gaines, Ronnie Van Zant popped a beer can and handed it to Allen Collins, who was next to Gary Rossington with a joint in his mouth. All obliged.

The Honkettes -- Jo Jo Billingsley, Leslie Hawkins, and Cassie Gaines -- were in the bathroom drying off, dabbing at smeared mascara, and chattering as they fluffed sweaty hair and curls. Dressed in tiny scraps of doeskin with feathers, fringe, and beads hanging off them, denim skirts, Frye boots or wooden platforms, they cooed and ahhed that I was such a good sister and eagerly scribbled their names.

"I love working with my brother," Cassie sweetly confided, struggling with a black felt-tip on the slick photo paper.

Less than a year later, three of the band members lay dead in a Mississippi swamp, victims of a plane crash. For years I've thought about Cassie, who died with her brother Steve and Ronnie Van Zant, and her comment, knowing that if I lost any of my brothers I might go mad.

The autographed photo of Lynyrd Skynyrd was destroyed by accident in 2000. Completely. Water leaked into the box it was packed in, and the ink (from those pre-Sharpie days) obliterated. The glass shattered, and what was left of the photo dried to the shards, stuck forever. Bill cradled its remains, nearly 25 years of his life in that long-treasured picture, then threw it away.