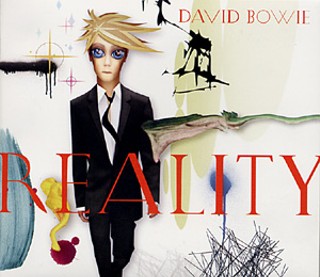 Reality (ISO/Columbia) The chorus of "Never Get Old" has the former Thin White Duke wishfully singing, "I'm never ever gonna get old ... and I'm never ever gonna get low." And that's OK -- a lot of people didn't get Low when it first came out (1977), and now it's a watershed moment in Bowie's serpentine history of personas and masks. Reality has none of that album's curdled paranoiac thrill, which is understandable since Bowie then and now couldn't be more different. Like the last several Bowie albums -- most notably last year's lovely Heathen -- Reality is certain to be heralded as a return to form, and on the walloping opener "New Killer Star," you'll believe it. The song has a thrusty, sleek drive that recalls the era when Bowie's wardrobe was less haute couture than hot shit, but it's the anomaly among the 11 tracks here, two of which are covers (Jonathan Richman's "Pablo Picasso," which rocks, and George Harrison's "Try Some Buy Some," which doesn't). After that rousing beginning, the flow is inexorably, albeit slowly, downward, and while Reality isn't a failure by anyone's standards, there's precious few moments that you can recall, much less hum, an hour after listening to it. Classic Bowie may well be a thing of the past, and those seeking new "Heroes" are unlikely to find them here. Still and all, above everything else, is Bowie's perfect blond voice, soaring above both the funerary "The Loneliest Guy" and the squall of the title track. And, truth be told, that's the only reality anyone has ever truly craved.