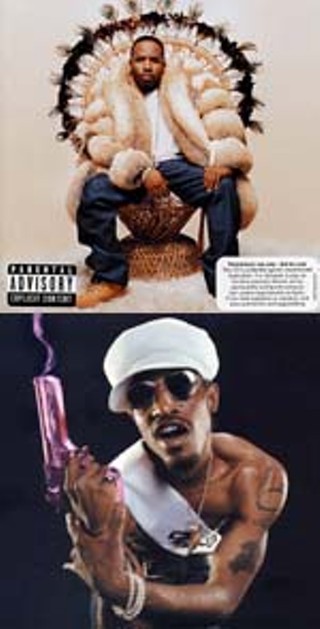 The Love Below/Speakerboxxx (Arista) Though there's nothing crunk about referring to Southern hip-hop as "dirty," it's Bible Belt gospel that Atlanta's OutKast is here to clean it up. "You oughta be detained by the hip-hop sheriff, locked up, no possibility of getting out," MCs Big Boi on "Ghettomusick," a lock down on the sad state of affairs that hip-hop's most flammable duo has found the rap game in since returning from their three-year hiatus. With the tag-team combo of Big Boi and Andre 3000 combining distinct solo albums -- Speakerboxxx and The Love Below respectively -- under one umbrella, OutKast's new material takes the bombs of 2000's Stankonia and splits the difference. The difference turns out to be a trippy, Philly soul throwback by Dre and a lush, hip-hop epic by Big Boi, both discs demonstrating that the partnership works best together (i.e., "Last Call"). There's phenomenal work (Dre's brilliant "Prototype" and "She Lives in My Lap," Big Boi's Jay-Z and Killer Mike joint "Flip Flop Rock"), yet not the instant classics expected from the combined resources. It's like Lennon and McCartney solo albums: plenty of solid tunes, but the pen held together is mightier than a solo sword. OutKast had no intention of starting any revolution with Southern rap, but they're pioneers nonetheless. Who knows if this formula spells the end of OutKast, and while we may not always look to the South for the future of hip-hop, we'll always be looking to OutKast.