If John Lennon had attended this weekend's ACL Fest blowout he might have screamed, "I've got blisters on my feet!"

Friday dawned cool and cloudy as Zykos frontman Michael Booher and manager Sally Clark searched in vain along Barton Springs Road for Clark's missing cell phone. Inside Zilker Park, Denton's Midlake, whom Clark also manages, took the stage promptly at noon for a half-hour of OK Computerized melancholia. And that was it: The second annual Austin City Limits Music Festival was off and running and wouldn't stop until the soccer fields were denuded and all that was left were the blisters on one writer's aching feet. Home base for the next three days would be the artist/media complex erected in the Cedar Grove picnic area, a compound of tents and tables where early Friday Cody Chesnutt chowed down on Rice Krispies Treats and Los Lonely Boys drummer Ringo Garza caught a few quick winks before the local trio was due in the gospel/blues tent. News 8 Austin's Andy Langer zipped to and from his on-air interviews on the station's golf cart, and everyone marveled at how thin Steve Earle was. (Atkins, it turns out.) Robert Earl Keen drew 5,000 fans to the minuscule BMI singer-songwriter stage, where J.T. Van Zandt later delivered the careworn songs of Mississippi John Hurt, Blaze Foley, and his dad, Townes, in the face of technical difficulties and overwhelming bleed-over from first the Mavericks then Leftover Salmon. Backstage at Spoon, Casey Monahan talked up the new Texas Music license plates featuring Blind Lemon Jefferson, available for $30 (plus registration fees) at www.enjoytexas music.com, while onstage Britt Daniel staked his claim as the Buddy Holly of indie rock. Staffer Lauren Vogel, just back from picking up Al Green at the airport, said her passenger was "weird. ... I don't think he's all there," but the reverend was present and accounted for on the Capital Metro stage, taking everyone to the river even though he didn't have time to play that song. "He's one of about 10 people I'd come to a thing like this for," said Susan Antone, also naming her former employer Etta James and Queen of Soul Aretha Franklin. At least everyone had ample time to reflect on Green's (literally) lights-out headlining set in the staggeringly long shuttle-bus lines.

The Old 97's did a little reflecting of their own Saturday, about their very first Austin gig at Logan's BBQ on West Campus, by playing "Hitchhike to Rhome" as the ubiquitous Beatle Bob bopped along stageside. The Dandy Warhols' languid drone perfectly matched the overcast weather, and thousands stood rapt as the big screen at the Cingular stage played Johnny Cash's "Hurt" video before the impromptu tribute necessitated by the cancellation of Cash's daughter Rosanne. Ray Benson acted as emcee for the Man in Black homage, bringing out Tift Merritt, the Drive-by Truckers, North Mississippi Allstars, and the Old 97's for a string of Cash favorites including "I Still Miss Someone," "Big River," and "Ring of Fire." The by-now steady drizzle couldn't douse the Truckers' Dixie fire at the Heineken stage, which burned even brighter later that night at the Mercury -- whoops, the Parish -- as the hard-rocking quintet successfully raised enough money to get back to Georgia. Over at Bright Eyes, as Omaha savant Conor Oberst revealed himself to be the new Gram Parsons (with Beth Orton as Emmylou Harris), Endochine addition Johnny Goudie said playing with Steely Dan/Doobie Brothers guitarist/missile designer/LAPD forensics expert Jeff "Skunk" Baxter was "like having a narc onstage." The local alt-rockers also vowed to "keep fighting the war on VD" to Z102's Chris Mosser; handed a copy of their new disc, Day Two, to filmmaker Cameron Crowe; and didn't look stoned at all during Goudie and frontman Casey McPherson's on-air interview with News 8's Langer. As Endochine departed for their Red Eyed Fly gig, the Latin explosion that was Cafe Tacuba reared its head from the Heineken stage, and left the entire festival in its hyperkinetic metal-polka-ska-New Wave-disco-soccer-chant wake. All that was left was to wander over to Pat Green with Dave Rios from the Texas Recording Academy and speculate why nobody with an AT&T cell phone could get any reception. Surely it wasn't because rival Cingular was one of the sponsors.

Sunday brought much-needed spiritual relief from the Shields of Faith before a powerhouse set from Tennessee preacher's kids the Kings of Leon, who would've been even better had they swapped slots with Heineken headliner Orton. Looking on was Strokes guitarist and KoL tourmate Albert Hammond Jr., predictably wearing the same suit as Friday, when he showed up to support his girlfriend in the Pierces. A visit to the Austin Kiddie Limits tent saw a glimpse of Clifford the Big Red Dog and an enchanting set from Sara Hickman, who had even Beatle Bob doing the Hokey Pokey by the end. As Lucinda Williams cursed her forgetfulness from the Cingular stage, Trish Murphy talked about her new album due next month, Paul Minor marveled that the SIMS tent sold out of T-shirts twice, and Rock & Roll Hall of Fame curator Jim Henke chatted about his experiences at Lubbock's Buddy Holly Festival over Labor Day weekend. Next, the Polyphonic Spree used timpani, harp, xylophone, and Beatle Bob to create a feel-good buzz that lasted through the lull of Yo la Tengo, who paid tribute to the ailing Alejandro Escovedo with a True Believers song at their Thirty Three Degrees in-store on Friday, and a discombobulated Ween. The time for R.E.M. drew nigh, and the throng of backstage laminate-holders began jockeying for position, with ACL staffers Darcie Fromholz and Dirk Stalnecker playing keepers of the velvet rope; waved up were Ben Kweller, Robert Randolph, Gibby Haynes, and inevitably, Beatle Bob. Opening with "Finest Worksong," the Athenians delivered a gorgeously realized hour and 45 minutes mirroring next month's greatest-hits CD: "Drive," "World Leader Pretend," "The One I Love," "Man on the Moon," and so forth. And even though Michael Stipe was his usual loose-limbed, graceful self, both set and festival peaked when bassist Mike Mills took center stage for a soul-shaking "(Don't Go Back to) Rockville." Like the festival itself, the song was dedicated to Johnny and June Carter Cash, and like the festival, it tells of a hometown that continues to exert an inexorable pull on its sons and daughters. Because despite the minor glitches mentioned earlier and despite crowds estimated at 45,000 Friday, 50,000 Saturday, and 60,000 Sunday, the Austin City Limits Festival is really all about, and only about, hanging out in and with your community.

A totally subjective list of people who made it extra fun:

Gemma Wilson and Nina Singh, for the Artist badge

Amy Corbin and Carrie Stribling, for the golf-cart ride

Casey Monahan, for the pen

Chris Payeur, for her "foxy sense of style"

Jimmy Smith, for the kind words

Jim Eno, for the introduction to Conor Oberst

David Cotton and Andrew DuPlantis, for the smokes

Brent Grulke, for the Astros updates

Michael Corcoran and J.T. Van Zandt, for the beers

Charles Attal and Charlie Jones, for the thousand-yard stares

Johnny Walker and Chris Mosser, for the interviews

Melissa Bryan, for the ride home 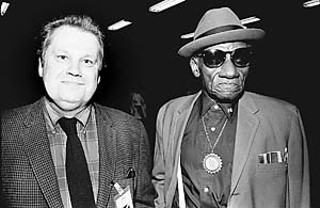 Sitting beside Janis Joplin at Thomas Jefferson high school in Port Arthur did little to prepare Tary Owens for his long journey in and around the music business. Owens, like Joplin, fled East Texas for Austin in the early Sixties, where he fell into the original Threadgill's folk scene and began seriously pursuing guitar. After graduating UT with a degree in anthropology and specializing in folklore, Owens made field recordings in Texas prisons as well as working with the likes of Mance Lipscomb, T.D. Bell & Erbie Bowser, and Roosevelt "Grey Ghost" Williams. He pursued music in every way imaginable, from label owner to performer, most recently with the Texas Redemptors. Owens was diagnosed with hepatitis C several years ago and later came down with cancer. He died Sunday in a hospice after treatment at M.D. Anderson Hospital in Houston. Owens, a member of the Texas Music Hall of Fame, was married to local chanteuse Maryann Price. -- Margaret Moser

On Sept. 19, 1978, at their very first gig, local punkers the Huns made history. Onstage at bygone Guadalupe DIY haven Raul's (now the Texas Showdown Saloon), lead provocateur Phil Tolstead thought it would be a good idea to plant a kiss on a nearby police officer. His smooch led to a full-scale riot and several arrests, including Tolstead and future Chronicle Publisher Nick Barbaro. The incident drew attention from Rolling Stone and Britain's NME and sparked a local revolution. "Our mission was to stir the shit, cure boredom, and strip the gears of musical privilege in Austin, represented by the folk, blues, and cosmic-cowboy oligarchies," wrote drummer Tom Huckabee in the liner notes to 1995's Live at the Palladium 1979 reissue. Twenty-five years later, the battle rages on at Emo's, Beerland, Trophy's, Room 710, and garages all over town.