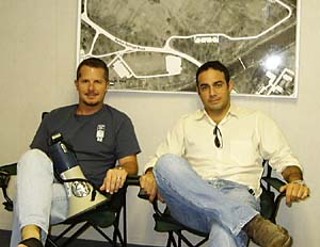 "No, it's my turn to hold the megaphone": Charlie Jones (l) and Charles Attal

Exactly one week before the Austin City Limits Music Festival, Zilker Park is serene and deserted. Deserted, that is, except for a small encampment of portable buildings in the park's southeastern corner. Here, in the ACL Fest command center, organizers Charlie Jones and Charles Attal, who oversee a staff of more than 1,000 volunteers and paid workers, managed to ignore their constantly chirping cell phones for half an hour.

TCB: How soon after last year's festival did you start planning this one?

Charlie Jones: The first steps, post-meetings with Parks & Recreation, the neighborhoods, our own staff, just making sure we felt that we did a good enough job to take it to the people again. That started a couple weeks after last year. Our wrap-up meetings were all really successful, and the neighborhood associations, specifically Zilker, wrote a proclamation to the City Council supporting it. That was our first step. Sponsorship, sales stuff started last year. Promotional plans started last year. The actual executing of this didn't start until late January.

TCB: What other big festivals did you look at?

CJ: His assistant Amy Corbin went to Coachella and did kind of a scouting trip. We took our entire team, everybody at Charles Attal Management and everybody at Capital Sports & Entertainment, to Jazz Fest for a couple of days.

TCB: What were they looking at?

CA: Sound systems. It was full tilt all the way from top to bottom.

TCB: Was there anybody you couldn't get?

CA: Everybody we went after we pretty much got.

CJ: The only one we haven't got yet that we'd like is Willie [Nelson].

CA: There's maybe one or two more that we just couldn't work the schedules out. It wasn't that they didn't want to play it. We've already got a list for next year, too.

TCB: Any areas y'all are nervous about?

CA: Guest list and the weather. That's all we care about right now [laughs].

TCB: What does happen if it rains?

CJ: You get a little wet.

TCB: Any plans for an ACL Festival DVD, or to broadcast it?

CJ: It's being discussed.

TCB: Where are the artists going to be staying?

CA: A couple at my house, a couple on the floor at Charlie's -- just kidding.

TCB: What are y'all most looking forward to once it gets started?

CA: When the first band starts rockin', it's gonna be great.

CJ: Just making sure the machine is running like it's supposed to. I look forward to seeing that. And the very last set on Sunday night, when you actually feel like you can breathe. Then you break out the bottle of tequila and have a shot.

Local ska wonder boys the Stingers ATX just got back from Europe, where they once again played backup band to genre pioneer Laurel Aitken. "He really enjoys being in a band with a bunch of young guys," says guitarist Jon Meyers.

Anyone looking to get away from the Austin City Limits commotion might consider stopping by the Long Branch Inn at 1133 E. 11th St. Owners James Stockbauer and Kumbala Crutchfield promise "old-time beers and old-fashioned fun."

Rob Hall, bassist for entropic local rockers blued, was struck by a black Mustang at 10th & Trinity last Saturday night and is still hospitalized. Anyone with relevant information is urged to contact

or the Austin Police Department.

ACL performers Spoon were anointed the future of rock in last week's "What's Next?" issue of Time. Writer Josh Tyrangiel likened the local favorites to a pre-Document R.E.M.

The grapevine has been buzzing with ACL Fest rumors, and it's our sworn duty to pass them along. Should they turn out to be false, just remember you read them in XL ent.

With Rosanne Cash bowing out for obvious reasons, talk of an all-star tribute from various festival headliners.

Wayne Coyne may not be bringing the Flaming Lips to ACL, but he is bringing himself.

The giant inflatable pig from Pink Floyd's Animals tour flying somewhere over the grounds, courtesy of the String Cheese Incident.

Mississippi bluesman Cedell Davis being backed by all of R.E.M. at his Sunday-night Continental Club show. 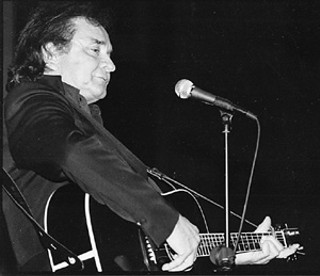 Still one of the most talked-about Austin club gigs in history is Johnny Cash's SXSW show at Emo's on March 17, 1994. Then-Emo's general manager David Thomson was on the bridge.

"At 3pm, as I was counting out the banks for the bartenders, I heard a knock at the front door. A few seconds later, one of my doormen told me that someone, indeed, is knocking at the door and could he have the keys to unlock it.

"Being the cautious manager that I am with an office full of money, I asked my doorman to go back and find out who was there before I let him unlock the door. When he returned, he was a little slow to answer my question.

"'Look, I'm really busy and don't have time for this. It's probably one of the bartenders screwing with you.'

"'Christ, Johnny Cash is not wandering around Sixth Street. Hell, even I can do a Johnny Cash impersonation.'

"As I approached the front door, there was another knock.

"Wow. Even I had to admit it sounded like Johnny Cash. Damn good impersonation!

"As I opened the door, a hand thrust through the light, and a dark figure entered the room.

"'Hello, I'm John. John Cash. And I will be working for you tonight.' 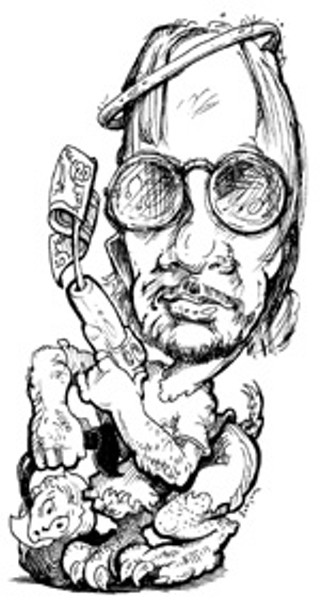 "Backstage, he shyly greeted John Hiatt, who made a beeline to meet him. Onstage, he belted out, 'It don't matter who's in Austin, Bob Wills is still the King!'

"In January 2000, I interviewed Zevon for a promotional disc for his album Life'll Kill Ya. When he was told that I had recently worked with Tom Waits, I perceived he felt a bit insecure about our talk being committed to CD. During our handful of meetings, he didn't exactly ooze confidence.

"He was oddly silent when I mentioned that Patti Smith had told me she chose Bob Dylan's 'Dark Eyes' as a duet when they toured together. But when our interview was over, he casually moved from his chair to the studio's black grand piano and performed a stately, moving 'Dark Eyes.'

"Warren Zevon got inside the songs he was singing. If you're lucky enough, his songs are now inside you."