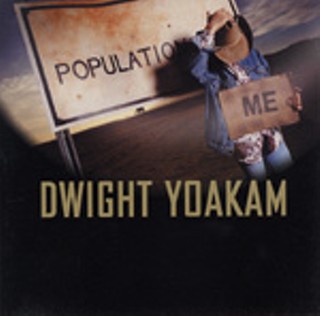 Population Me (Koch/Audium) In recent years, Dwight Yoakam has chiseled himself a unique niche as country music's leading interpreter of Seventies classic rockers like Queen and Cheap Trick, but on Population Me, he revisits his own "classic" period: the coltish honky-tonk of early albums Guitars, Cadillacs, Etc., Etc. and Hillbilly Deluxe. Produced as always by Yoakam's right arm Pete Anderson, Population Me is snappy and song-heavy, clocking in at just over 37 minutes with not an ounce of fat on it. Yoakam continues to shine on upbeat Bakersfield weepers like "No Such Thing" and "An Exception to the Rule," and his Kentucky roots come bouncing in through Earl Scruggs' rollicking banjo on "Trains and Boats and Planes." Meanwhile, the border-tinged "Fair to Midland" and Hank Sr. homage "Population Me" are such vivid portraits of desolation and despair that Yoakam could commission them as screenplays. Willie Nelson shows up to connect the dots between heartache and various precious stones on "If Teardrops Were Diamonds," before Population Me exits stage left with the wry "I'd Avoid Me Too" and silken ballad "The Back of Your Hand." Yoakam may have cast himself as the mayor of Lonesome Town this time out, but it's a role he was born to play. "I'm not old, just out of date," he insists on opener "The Late Great Golden State," a valentine to the vanishing California of his salad days. Not quite yet, Dwight. Not quite yet. (Friday, 8:45pm, Cingular stage)